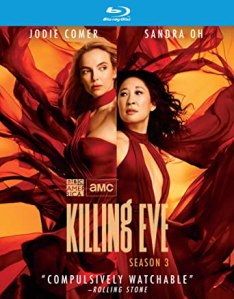 A rather odd bunch of releases this week. I’ll start with my favorite of the group, Killing Eve: Season 3. Now when the show first came out and became popular I never gave it the time of day. It was nominated for all kinds of awards and I honestly had no idea what it was about. Heck I even met one of its leads, Jodie Comer, working on a movie last year. I finally started watching the show and I gotta say, I get the hype. It’s a fun cat & mouse story with hysterical one liners (mostly from Comer) with both lead actresses (Comer and Sandra Oh) giving two drastically different types of performances. Comer is an assassin and Oh, the Eve in the title, is a security operative who puts the pieces together to figure out just who Comer is. Season 3 opens with both characters trying to move on. Eve had been shot and Comer’s Villanelle tries to move beyond her killing days until someone from her past enters the picture. The season focuses a lot on trying to figure out The Twelve with both characters trying to find new paths, but just not being able to. Supporting characters like Carolyn, Kenny and Konstantin still play key roles. I absolutely love Comer in her role. She’s funny. deadly and dominates every scene she’s in. Oh’s performance is much different, much more reserved and I love the Konstantin character as well. It’s a show that receives a lot of awards that I actually understand why. Comer’s Villanelle might be my favorite character on TV right now.

Second we have Evil Takes Root: The Curse of the Batibat. Being released through Mill Creek Entertainment, this supernatural film opens with the death of a woman in her house. She was on the phone with her daughter saying someone was in the house and her daughter and husband don’t get home in time to save her. She had also called a previous lover saying weird things were happening. It’s that time of year where we get a lot of horror releases, some good, some bad. This one isn’t great, but it’s at least good for one viewing. The only person I’m familiar with in it is Nicholas Gonzalez who plays the former lover who just happens to be a paranormal investigator. There’s a lot going on for a movie barely over 90 minutes. The daughter and dad go back and forth a lot. There’s a deaf girl into witchcraft. A priest joins the paranormal investigator who clashes with the husband because the husband knew of the affair. Some of the special effects are decent, but I’m just not a supernatural horror guy. I prefer old school slashers, but again this is good for a watch even if I didn’t love the ending. 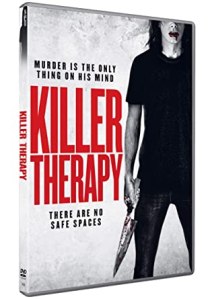 Sticking with horror-esque, next is Killer Therapy. This is about a young boy with issues who doesn’t like that his parents adopt a girl. Another boy falls from a tree and some people want to believe it was an accident, but others claim the young boy pushed the other boy. He goes away for treatment, gets released, but has another incident in high school when another boy is killed. He then gets released a few years later and he wants to be normal. But as he slowly starts to lose it, he seeks revenge on all the therapists who tried to fix him, but couldn’t. Being barely over 90 minutes helps this film as well. It never wanders too much and pretty much gets right into it. It might not “wow” too many people, but I think it’s good for one viewing as well. 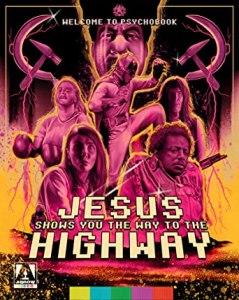 If horror isn’t your thing how about something absolutely indescribable? Jesus Shows You the Way to the Highway is not a religious movie as it might seem, no it’s something else. What it is, I have no idea. Let’s see how I can explain it. There are two men, one a white guy, the other a black dwarf hunchback (maybe?). They are CIA agents who go into a virtual world through VR glasses to stop the Soviets from cyber attacking Psychobook. The dwarf doesn’t want to be an agent anymore, he wants to open a pizza joint with his wife who wants to open a kickboxing school. But he gets stuck in virtual reality during one last job and they can’t wake him from a coma. He meets someone who looks like Jesus who tries to convince him of the truth. There’s also a black Batman ripoff character who tries to run Psychobook and weird bug creatures and they wear cardboard masks when in that world. To call it odd is an understatement. Is it good? Probably not. Will it be something I talk about for years though? 100% yes. It also comes with the director’s debut Crumbs which they say is a spiritual predecessor to this film. If you like bizarre, midnight showing schlock, this one is clearly for you.

How do you follow that up? With a movie starring Coolio of course! Two Hundred Thousand Dirty came out a while back I believe and might have already hit DVD before, but it’s out again this week. Two down-on-their-luck mattress salesmen get caught up in a scheme with a worker next door and their new female co-worker who convinces them to kill her ex-husband for the insurance money. It wants to be a great dark comedy, but it didn’t really work for me. It has some good moments, but I watched it last week and honestly don’t remember what those good moments were. You expect it to all go bad with these characters and it does. None of the plan works out well. They keep digging the hole they are in even deeper and at the end, well nothing really changes. I’m sure someone loves the film, but that someone isn’t me.

Next is In the Life of Music starring Ellen Wong as an American visiting her relatives in Cambodia for the first time. But the film doesn’t stay current, it has stories involving war and Cambodia’s past all involving one song. She wanted to learn about her parents and how they met and this one song “Champa Battambang” connects the stories through the time of their meeting, survival of war and coming back to modern day. It’s not a bad movie, but if you are watching it for Wong, she’s not exactly in it all that much. It spends a lot of time in the past which makes sense with the story the film wants to tell overall. I’m not familiar with the song so I have no idea how well known it is in Cambodia, but I’m assuming it’s a song they all know and spans generations. I preferred the film when it stayed in the past and focused on them meeting and trying to survive the war. I actually could have used less of Wong’s current storyline because I enjoy history more. 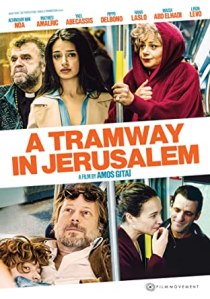 A Tramway in Jerusalem’s synopsis is: The Light Rail Red Line of Jerusalem’s tramway connects the city from east to west, from the Palestinian neighborhoods of Shuafat and Beit Hanina to Mount Herzl — a journey that comprises the culturally complex makeup of the city. Basically it’s a movie with actors portraying the different types of people you see on the train on a daily basis. You have security stopping people and asking for passports. You have all kinds of religious types. People going to and from work, school, dates, etc. Now as someone who travels mostly by public transportation in Boston, I understand the array of people you see on public transportation and this one adds the religious and danger element, but I’m not actually sure what I’m supposed to take away from it as a film. Other than, here are people on the train depending on the time of day, what exactly is the narrative of the film? It’s not badly made or anything, but what more than cameos from people portraying different people is the point? 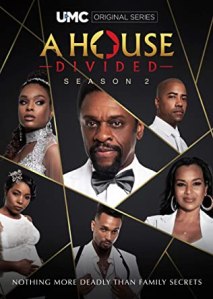 Just a couple of more to get to. Next is A House Divided: Season 2. The show is about a family descended from a slave turned richest woman in Los Angeles and their lives in current L.A. The mother/wife had died and the family is being investigated by the government. Season 2 sees Carissa aiming to be the matriarch of the family. Cameron Sr. returns from Panama. All the siblings have drama. Stephanie is dealing with her pregnancy. Alexis also tries to get with Cameron Sr. It’s only 6 episodes so it’s easy to binge. If you like shows like Power and Empire you might like it. 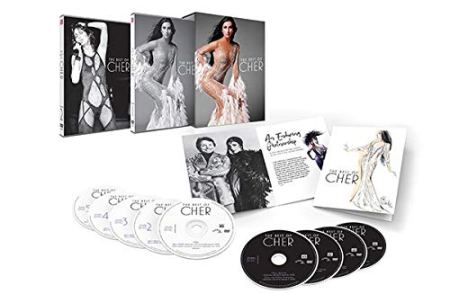 Speaking of power and drama, next is The Best of Cher. This is a pretty substantial box set. This 2 volume set features 9 total DVDs full of TV specials, 10 episodes of Cher, two Las Vegas concerts, and the documentary Dear Mom, Love Cher, Cher is an icon and it’s easy to see why with a set like this. Sure everyone knows her from her music, but this reminds you of how funny she was and how overall talented she truly is. She’s still performing nowadays and my sister saw her in concert just last year. It’s everything you want from Cher, great music, wild outfits, comedy and lots of heart too. For someone who has lived most of her adult life in the public eye, you forget just how much she’s been through. It has interviews with Lily Tomlin, Designer Bob Mackie who has made some of the legendary outfits we think of and Cher herself. The episodes of Cher haven’t been around for decades and of course include larger-than-life personalities like Elton John. If you are a fan of hers, this new set is pretty fantastic and was a lot more personal than I expected it to be honestly. 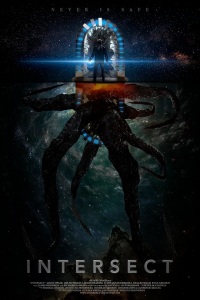 Doing something a bit different this week. Last we have a film called Intersect. It’s hitting VOD on September 15 and has a Special Edition Blu-ray available through its website. With more films going VOD or streaming I wanted to include it in this article to broaden the home video release aspect of the weekly article and the site. As for the film itself, it’s about 3 friends who develop a time machine, but like most sci-fi films, they soon realize there are consequences to their actions. They learn that they are being manipulated by mysterious, unseen forces from another dimension. The film spans different timelines showing how the 3 friends met, how they got involved with their mentor (played by James Morrison), an early dramatic childhood accident, and of course deal with the religious right who don’t like science. It has some cool special effects and takes the science seriously (unlike other time travel films). Other than Morrison, I’m not sure if I’m overly familiar with the rest of the cast. Well the one lead (Jason Spisak) has an amazing voiceover career (Young Justice among others), but I don’t know if I’ve seen him act on screen. I do think the movie spends a bit too much time in the past at one point because when it jumps back into the present day I did forget about the 3 leads at that current age. I liked the creatures a lot so I do wish they were in the flick more, but overall for a movie I hadn’t heard of it’s a pretty enjoyable watch especially if you like sci-fi.