Written and created by Marnie Dickens (Thirteen), this six-part romantic drama follows Julia Day (Julia Ormond), a recently-divorced woman who’s feeling increasingly detached from her three grown children and not sure of her place in the world. She considers Benjamin (Ben Barnes) —a thirty-something copywriter with a shrouded past—a second chance, a companion who makes her feel whole for the first time in years. However, her children and ex-husband are suspicious of her new lover and his motives. A dark family secret has also been buried for several decades—a trauma that has impacted their personalities and decisions in the present.

Playing Julia’s family is Alex Jennings as Julia’s ex-husband Ted; Sebastian Armesto  as the high-achieving eldest son Patrick, always trying to be an honorable man despite his own flaws; Jemima Rooper as Della, the middle child whose finger is permanently on the self-destruct button; and Archie Renaux as Leo, the baby of the family who still lives with his mother and idolizes his father. The series also stars Julia McKenzie as Ted’s mother, Hazel. 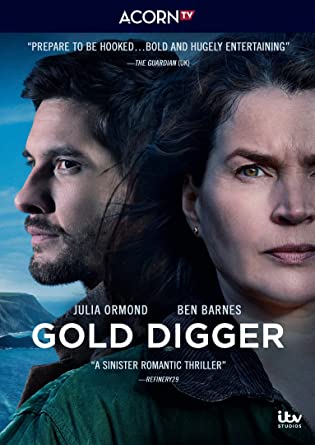 Overall I enjoyed Gold Digger, but you do sit there waiting for the shoe to drop. It’s only six episodes so you know at some point there will be a twist, is Ben Barnes a gold digger, is he in love with Julia Ormond’s character or is there even more to it? I’m also not sure how they can continue it into another season whereas most of these Acorn shows leave the door open for follow up seasons.

I like Ben Barnes. I like him on a personal level and when this came my way I was looking forward to it. Julia Ormond nails her character as she always does and you as the viewer aren’t sure if she should trust Benjamin. They meet at a museum. She’s almost double his age. What can he possible want with her? There’s enough mystery in his backstory, no online or social media accounts, so is he real or a phantom?

Besides waiting for the big reveal, the 3 siblings bothered me a bit. You understand they are looking out for their mother (and her money), but their nonstop attacks and accusations did get to me a bit. Their father is still in the picture and there is a backstory to the entire family about abuse and the father cheating with the best friend, but a lot of that seemed unnecessary in a way. Their characters are never really fleshed out because it’s not about them, but they are given some characteristics that ultimately don’t really pan out. The oldest son is having an affair, but you don’t get anything more about it really. The daughter is a comedian having love issues with an ex-girlfriend. The youngest son is a trainwreck and ultimately never develops into someone you care about.

But the show works when it’s focused on Barnes and Ormond. In society we are more willing to accept an older man with a younger woman and this plays on that trope well. Because it’s an older woman and a younger man, you do question his motives as the viewer. You question how she can stay after so many red flags, but then you remember she’s coming off a divorce and is new to the dating/relationship scene. It’s smart in how they give and take just enough to keep you guessing.

Gold Digger came out last week but I didn’t get my copy until a few days ago. I binged it pretty quickly with it only being 6 episodes. Overall I did like it, but there could be some stuff clipped to make it more tight. You might get some of the twist, but you won’t get the whole thing. Barnes and Ormond have solid chemistry together and when it sticks with them it’s good. Again not really sure how a follow up season could happen, but I guess we’ll wait and see.