The ten-hour series is centered around four ordinary people who feel there’s something missing in their lives, but they can’t quite put their finger on what it is. This diverse foursome is brought together by chance – or perhaps it’s by design – when they stumble onto a puzzle hiding just behind the veil of everyday life. As they begin to accept the mysterious ‘Dispatches from Elsewhere’ challenges, they come to find that the mystery winds deeper than they imagined, and their eyes are opened to a world of possibility and magic. 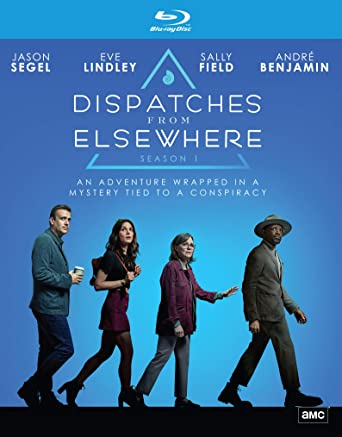 Dispatches From Elsewhere ends up being nothing more than Jason Segel’s existential crisis. For 9 episodes you get a weird game with four main characters trying to figure out if the game is real, if it’s fake, if it’s one giant conspiracy theory and everything in between.

These four characters start interacting with one another all coming from different backgrounds, but all needing something new in life. Jason Segel works for a music website where he does algorithms to tell you what songs to listen to depending on what you’re currently listening to. Eve Lindley works in art. Sally Field’s husband is sick. Andre Benjamin is a rich genius who believes the entire game is a web of lies with big corporations and elite folk running it all. They work together trying to find the missing Clara woman.

It starts out different yet intriguing and once they get into it you start wondering if there is more to the game than meets the eye as well. Was Clara killed? Who took her? Which side of the game are the good guys and who’s the bad guys? Is it just a game or is someone pulling all the strings? The characters start becoming friends and maybe more than friends. They get caught up in each other’s lives. As episode 9 ends you think you’re going to get answers with episode 10.

Then episode 10 kicks on and well, it’s hard not to spoil. Well it’s not hard because it really doesn’t answer anything, but to me it feels like a giant middle finger to the viewer. Watching it, I rewound the first few minutes because I thought they called a character a wrong name. Nope, they didn’t. It’s just Jason Segel taking his show off the rails. I honestly didn’t get it. Like I get what he’s saying about himself, but it literally didn’t do anything for the show or the characters. If you’ve seen it you get what I mean. Instead of answers and closure you get a guy who clearly thinks he’s still playing David Foster Wallace or hates the fact he became famous or something. I’m sure someone will tell me I just didn’t get it and that’s fine. Not sure if there will be a second season or not, but if there is, I’ll skip it.