14-year-old Eun-hee moves through life like a hummingbird searching for a taste of sweetness wherever she may find it. Ignored by her parents and abused by her brother, she finds her escape by roaming the neighborhood with her best friend, going on adventures, exploring young love and experiencing everything that comes with growing up in a country on the brink of enormous change. 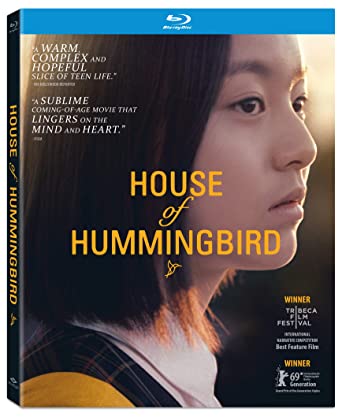 House of Hummingbird is one of those movies I’m just not the target audience for. I’m not a fan of coming-of-age movies and never was even when I was coming-of-age. There is absolutely nothing wrong with the film and those who like the genre will like it, it’s just not for me exactly.

It’s about a 14 year old Korean girl, Eun-hee, whose parents are more focused on other things especially her older brother. He’s abusive to her and the family dynamic is all about his future. They want her to get an education, but he’s the potential star of the family. Even her older sister is ignored. Eun-hee just wants some attention and to figure out who she is in life.

She has a close friend she explores with. She gets a boyfriend. She’s learning a foreign language and her teacher has a big influence on her. Another girl likes her and she’s tempted to explore that. She also has a medical issue and has a lump removed from her neck/head. Meanwhile all this is happening during 1990s Korea with political movements and the death of the North Korean leader. There’s a bridge collapse that plays a big role as well.

Again, there is nothing wrong with House of Hummingbird, but it’s not something I can see myself watching again. It’s a bit too long (over 2 hours) and wanders a bit because of it. The young actress playing Eun-hee is great though and she really captures that time between innocence, discovery and figuring out who you are. If you like coming-of-age stories, it’s a solid story with a great lead performance.