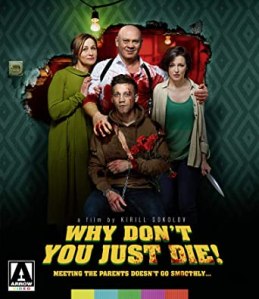 This Review Roundup is a mix of movies that came out during lockdown but weren’t able to ship until recently and one new release. Why Don’t You Just Die! is a Russian drama heavily inspired by American filmmakers like Tarantino. It’s about a woman who convinces her boyfriend to kill her father after claiming he raped her as a child. The boyfriend shows up at the family apartment with a hammer and soon learns her father is a cop and maybe she isn’t telling the truth. It’s predominantly a single location film with lots of gore and action. I dug it. There are twists and turns, corruption, violence, blood and so much more. I can see it becoming a popular film in the States with those who see it and eventually the filmmakers getting more work. I’m not familiar with anyone involved but I enjoyed the performances, the tone, the violence and style. Cool little flick I can see myself watching again.

Second we have Blood Tide. This early 1980s film stars Martin Kove and James Earl Jones and is about an adventurer hunting for treasure in Greece who accidentally frees a monster that forces local villagers to sacrifice virgins. If you’ve seen it, you remember it for one thing, Jones punching a watermelon instead of using a knife to eat it. It’s an odd flick. The setting is beautiful (as are the women) and the creature is fantastic, but there is so much wasted time in between. They never really explain why the sister is mad either. It’s like they spent all the budget on the shooting location and the creature effects and kind of forgot to fill in the storyline blanks. But I’m sure it’s a cult classic to a lot of people and understandably so. I asked a fellow Nerd Templar if he had ever seen it and he brought up the watermelon scene so there are clearly fans out there. The film looks fantastic on Blu-ray especially the water and scenery. If you are a fan, this is a great release for you.

Third we have America as Seen by a Frenchman. At the end of the 1950s, celebrated French documentarian François Reichenbach (F for Fake, Portrait: Orson Welles), spent eighteen months traveling the United States, documenting its diverse regions, their inhabitants and their pastimes. This documentary is its result. It shows big cities, small towns, beauty pageants, rodeos, modeling shoots and everything between. It came out in 1960 and showed the rest of the world the diversity of America. I’m sure (even then) people only thought of New York City or Los Angeles or rural Texas when they thought of the US, but this shows everything else. It was probably pretty eye opening for non Americans. It’s well shot and has a great score and I’m sure it’s beloved by a certain crowd. Not sure if it’s something I’d watch again, but it was kinda cool for its time.

Sticking with documentaries, last we have Advocate. It’s about Lea Tsemel, an Israeli lawyer who defends Palestinians accused of crimes. I was not familiar with the woman, but I guess she’s pretty well known and has been for decades. It combines her work today with her past involvement in movements. The old footage and photos were pretty cool actually. Obviously if you know who she is and what she does it will be more entertaining for you, but I can also see some people getting mad at it because she is an Israeli and to them she stands against them. She’s been this way from the get go being an early participant in human rights for those she may personally not agree with or who her country does not agree with. From the beginning she tried to bring sides together instead of the fighting over land. The more you know about her the more you’ll enjoy this, but it’s good for at least a historical watch.