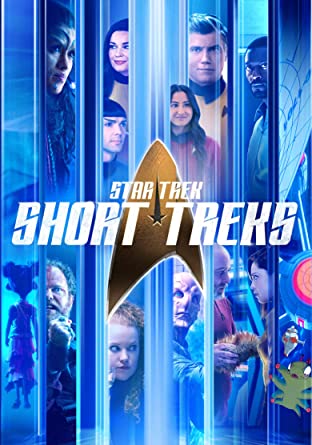 Star Trek: Short Treks is a collection of shorts from Star Trek: Discovery. Now I don’t have the CBS app so I’m not sure how these are watched outside of this DVD collection. I’m assuming you can watch them the same way you watch the show, but I have no idea.

As with any collection of shorts, there are some that are better than others. The standout is the H. Jon Benjamin short. He plays a scientist who wants to use Tribbles for meat. The Trouble with Edward is easily the best short in the collection because H. Jon Benjamin is awesome and so aren’t Tribbles. Of course it all goes absolutely wrong and the short is hilarious. Rosa Salazar (Alita: Battle Angel) also stars.

Some other big names also appear. Aldis Hodge (Straight Outta Compton) stars in Calypso where he’s alone on a ship with just the AI running things. Rainn Wilson stars in The Escape Artist and Doug Jones stars in The Brightest Star but of course you won’t recognize him like most of his roles.

There are also two animated shorts in Star Trek: Short Treks which are cool, but I liked the live-action shorts better. For a collection of shorts, the DVD is pretty packed with stuff. You get all the shorts plus almost an hour of bonus materials. If you watch Star Trek: Discovery, this is a great addition. Even if you aren’t a diehard of the show (I’m not), you can still enjoy these shorts. They have great production value for shorts and have big names from the show and beyond.