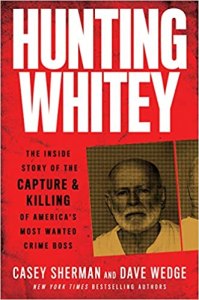 For the first time, Boston reporters Casey Sherman and Dave Wedge draw on exclusive interviews and exhaustive investigative reportage to tell the complete story of Whitey Bulger, one of the most notorious crime bosses in American history—alongside Al “Scarface” Capone and Vito Genovese—and a longtime FBI informant. The leader of Boston’s Winter Hill Gang and #1 on the FBI’s Most Wanted list, Bulger was indicted for nineteen counts of murder, racketeering, narcotics distribution, and extortion. But it was his sixteen-year flight from justice on the eve of his arrest that made him a legend and exposed deep corruption within the FBI.

While other accounts have examined Bulger’s crimes, this remarkable chronicle tells the story of his life on the run, his capture, and his eventual murder inside one of America’s most dangerous prisons—”Misery Mountain”—in 2018. Interweaving the perspectives of Bulger, his family and cohorts, and law enforcement, Hunting Whitey explains how this dangerous criminal evaded capture for nearly two decades and shines a spotlight on the dedicated detectives, federal agents, and prosecutors involved in bringing him to justice. It is also a fascinating, detailed portrait of both Bulger’s trial and his time in prison—including shocking new details about his death at Misery Mountain less than twenty-four hours after his arrival.

Granted access to exclusive prison letters and interviews with dozens of people connected to the case on both sides, Sherman and Wedge offer a trove of fascinating new stories and create an incomparable portrait of one of the most infamous criminals in American history.

If you grew up in Massachusetts prior to the 1990s, you most likely have heard the name James “Whitey” Bulger. If you grew up in the Boston area in a family of Irish heritage in that same time period, you were definitely familiar with it. There have been countless books written about the man, and one, Black Mass, has already been turned into a film starring Johnny Depp. Even The Departed loosely based Jack Nicholson’s character on him.

Whitey Bulger, like gangsters before him, has become a man of myths and legends. The new book Hunting Whitey: The Inside Story of the Capture & Killing of America’s Most Wanted Crime Boss by Casey Sherman and Dave Wedge not only tries to demystify the South Boston kingpin, but sets out to show the man was a monster and not the Savior of Southie some people still seem to believe to this day.

For multiple decades Bulger was involved in pretty much every illegal activity you can think of in Boston. You read that right, decades. You may ask how getting away with it for that long is possible especially if you aren’t familiar with Bulger’s story, but the last sentence of the previous paragraph is the key. Whitey Bulger was a gangster, pure and simple, but because he gave out turkeys and “kept the drugs out of Southie” people loved him. Oh, he also was an FBI informant from the get go and was protected by the Feds the entire time as long he fed them information about the Italian mob. The FBI, the State Police, politicians, Jimmy Bulger had an in with all of them. Maybe his brother Billy Bulger helped with the political angle, maybe he didn’t, but the authors clearly let their opinion known about Billy Bulger. But then the 1990s hit and Bulger went on the run and that’s where this book starts its story.

The book is pretty much a three act (non-fictional) story. It opens with the team put together in the 2000s to track down Bulger, but then it jumps back to the 90s when Bulger first left South Boston and eluded the authorities for almost 20 years. It has exclusive interviews with people Bulger met on the run including a family in Louisiana and neighbors in the apartment complex in California he and his girlfriend Catherine Greig lived in for years. Bulger used fake IDs he either got through friends or would outright buy off homeless men. He had money stashed everywhere and would slowly put together an arsenal of weapons to defend himself. What the book points out that really helped keep Whitey hidden was that outside of the east coast, no one really knew who he was. California wasn’t South Boston. In California he was just an old man, not a recognizable gangster. There were close calls of course, someone thought they saw Whitey at the theater (watching The Departed of all movies), but wasn’t able to apprehend him. Between being anonymous in a wide open area and the Feds back home embarrassed at the level of corruption in their own department, Jimmy Bulger felt invincible.

Act 2 of the book is the apprehension and trial. For years Bulger was the FBI’s Most Wanted Man, but the events of 9/11 both hurt and helped him. The war on terror dropped Whitey in the rankings putting most of the Fed’s effort into the capture of Osama bin Laden, but it also meant traveling got a lot more difficult. After the death of bin Laden, Whitey went back to #1 and he knew his time was limited. The book really surprised me in explaining what actually got him caught (I won’t spoil it) and then it gets into what was the trial of the century here in Boston. It became a variable of who’s who of gangsters, authority figures, relatives of victims and everyone waited for the man himself to testify. Again, not going to spoil anything here.

The third act is Bulger’s incarceration and eventual death. The authors have exclusive interviews and even photos of Bulger and an inmate that taught him art while behind bars. That’s the best part of the book, the exclusive photos of Bulger’s apartment, personal photos, interviews no one else has ever put together and documents available to them. What I liked most about the third act is, even though Bulger 100% deserved to be in prison, the authors highlight the treatment he received at the end. He was moved to different federal prisons and by the time he was killed, he was in poor health. He should have never been moved to the final prison he was at, gangster or not. Bulger lived by the sword and would eventually die by the sword and the book does not hold back on the details of his death. Even in his final moments, there was a level of corruption the average person would never believe.

Hunting Whitey: The Inside Story of the Capture & Killing of America’s Most Wanted Crime Boss is a must read for those of us who grew up around the stories. It’s also a must read for the wildly popular True Crime genre fan. The new and exclusive information Sherman and Wedge bring to light should finally close the door on whether or not Bulger was a good man. Sure good people can do bad things, but bad people can also do good things when it benefits them. It’s a fascinating and informative book that will blow people away on the sheer level of crime and corruption that plagued Boston for decades.