This Review Roundup has a couple of new releases and some movies that came to me late because of the events in the world and a couple of films I requested. First is Ip Man 4: The Finale. We here at The Nerds Templar are big Donnie Yen fans and like the Ip Man franchise. This fourth film finds Yen’s Ip Man traveling to San Francisco, California to watch his student Bruce Lee in a competition and deal with local elders while also trying to get his son into an American school before he dies. I’ll be honest, I enjoyed the film because I enjoy the series and Yen, but watching a film about Chinese and American tension in our current crisis was different. If I watched this 2 months ago, no political thoughts would have crossed my mind. Distancing the political things and pro-Chinese storyline, the film itself is fun. Even as he ages Yen is still fantastic in the role. He gets to fight Scott Adkins who I also enjoy. As with the previous films, the production design is top-notch with great costuming. Even with this one being based in California, there’s a fantastic Chinatown set and military base. If you’ve enjoyed the series, this is a nice finale for it. Definitely recommended for Yen/Ip Man fans!

The next bunch of films come from Mill Creek Entertainment. Most came out in April besides one that was released in March. First is Heroes, the early 1980’s film starring Henry Winkler, Sally Field and Harrison Ford (in a small role). Winkler plays a Vietnam vet who escapes a medical place to go on a cross-country trip to start a worm farm. He befriends Field on the bus and meets up with his friend played by Ford before leaving him to meet up with another ‘Nam friend. I had never seen the film and Winkler’s performance reminded me of Adam Sandler in Uncut Gems. He’s his own worst enemy and over hyped. He gets himself and Field into trouble on the way and the ending you can kind of guess. It is weird seeing Winkler in a non-Fonzy lead and the film wants to shine some light on the plight of Vietnam vets at that time. I’m sure the film has a lot of fans because of the cast. I’m not sure if it’s been available on Blu-ray before, but it looks pretty good in HD.

Sticking with older movies, Eddie Macon’s Run is another film I wasn’t familiar with. It stars John Schneider as a prisoner who escapes while performing at a rodeo. Kirk Douglas is the man who tries to track him down. Schneider goes to jail for assaulting his boss (John Goodman!) because the company took money out of his check he wasn’t expecting. He has a wife and kid and they try to meet up with him while on the run. Another film I’m sure has a bunch of fans because of the cast and I’m not sure if it’s been on Blu-ray before either. I thought it was good enough for one viewing.

A third movie I had never seen despite having a big cast is Trapped starring Charlize Theron, Kevin Bacon, Stuart Townsend and Courtney Love. This 2002 film sees Bacon as a child kidnapper who takes Theron and Townsend’s daughter (Dakota Fanning) and wants $250,000 for her return. She has asthma and has issues and then another person gets involved. It’s not bad, but I can understand why it’s flown under the radar for having such a big cast.

All the Pretty Horses has been available before, but I hadn’t seen it in a while. Despite a cast including Matt Damon, Penelope Cruz, Henry Thomas and Lucas Black and directed by Billy Bob Thornton, the film wasn’t the home run they expected it to be. Based on a Cormac McCarthy novel, it’s about 2 cowboys who get into trouble when they head to Mexico and one falls for the rancher’s daughter. It’s a beautiful film to look at with great backdrops and a fantastic score, but it’s also kind of a mess. The film was cut up in post and some of it feels long, some of it feels out of place and jumpy. It’s not as bad as I remember, but there’s good reason it’s not considered a classic despite it wanting to be one.

Dolly Parton’s Unlikely Angel is out on DVD. This mid 90’s movie saw Parton play a country singer that dies in an accident who can’t get into Heaven without performing a good deed. She must get a family back into shape because widower dad works too much and the kids aren’t overly close. I had never seen the movie before and it definitely has Hallmark movie vibes to it so if you like those movies today, you’ll enjoy this. The highlight is Parton singing of course. Not really my type of movie, but I can see others enjoying it.

Penance is a 2009 film with a few big names including Tony Todd, Michael Rooker and Graham McTavish. A young mother turns to stripping to support her daughter and takes a job that gets her locked up in an asylum type place with terrible people. I might have liked it if it wasn’t found footage/shaky cam style. That’s my least favorite type of horror films and I find it annoying and cheap. If it was shot normally I might have liked it. The story isn’t overly original, but it has some good gore and nudity which you expect in horror. But the stripper has everything filmed for a show and it’s so unnecessary. It’s just cheap and gimmick-y to me. Rooker and Todd have small roles, but McTavish is pretty creepy. A different style of filmmaking and it might be worth watching.

Last of the Mill Creek releases is Ultraman X: The Movie – Here He Comes! Our Ultraman which actually comes out this week. Mill Creek has released a slew of Ultraman products this year and this one had a lot more action to it. I liked this one a bit more because there are kaijus fighting the Ultraman heroes and it seemed more like a throwback to 70s ones I liked. A TV host breaks into a pyramid where he steals a gem releasing a monster who wants the gem back. I definitely liked this one more than the last couple of releases of Ultraman, but I still like the classic ones more.

The next few titles come from Wild Eye Releasing, a fun place for low budget horror I have a soft spot for. First is Impact Event which has a couple of big, cult names in it like Michael Berryman, Richard Greico and Vernon Wells. It’s not a great film, but it was good timing that I watched it now. It’s about a post-apocalyptic event that finds people surviving in an abandoned fun house. Two men and one woman try to survive the fallout of a meteor, but end up having to fight off other survivors who want their location. Again, not great, but it has some cool effects and even comes with a warning in the beginning because of strobe lights. Greico is pretty much just shown as another survivor on the radio and Berryman is in a prison scene. A guy dressed up in clown make up is always fun! 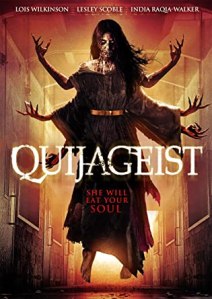 Second we have Ouijageist which sees a young mom move into a new apartment where she finds a Ouija type game in the backyard. Things immediately start going bad as her friend falls down the stairs, her kid gets trapped in the bathroom with hot tub water, her ex has an outburst at a cafe, etc. It’s not great and I think it’s British. The lead actress isn’t too bad, but it’s a film we’ve seen many times before. The positives is that it’s not shaky cam/found footage and some of the effects are pretty good. I’ve seen a lot worse and I’ve seen a lot better.

Last we have One Night in October. This is sort of an anthology film, but sort of isn’t. I don’t think the stories connected, but the way it was shot it sort of seems like they are. Most anthology films are shot separately, but this has a story about 4 friends at a corn maze, a new woman in the neighborhood being kidnapped and another woman meeting up with an ex, but she has way more to her than you think. The acting isn’t great, especially the corn maze group, but the effects are pretty cool. The kidnapped woman part was my favorite and had tons of gore and blood. Keep your expectations low and you might like it.