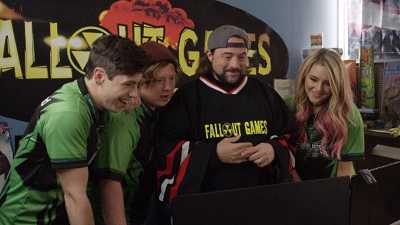 The deal was brokered by Eric D. Wilkinson on behalf of MVD Entertainment Group and Noor Ahmed of Reder & Feig LLP on behalf of the filmmakers and CineForge Media.

The films’ star and producer Greg Grunberg teases “after being in Star Wars I thought the next logical step would be to work with these master filmmakers in Phoenix, Arizona on an indie sci-fi comedy with a slant towards gaming. I need a new agent! I love this film so much and can’t wait for the world to see it. And with the help of everyone at MVD the time is right to level up.”

Scott Conditt and Jeremy Tremp, who wrote & directed, added “we are so stoked to finally be releasing Max Reload to audiences! It’s been a long and magical road making this film with some amazing people and it’s finally time to press PLAY!”

“We are thrilled to bring this unique action-adventure to audiences, and are especially excited to partner with Conditt & Tremp and the production team on the release,” says Eric D. Wilkinson of MVD Entertainment.

In MAX RELOAD AND THE NETHER BLASTERS, a small town video game store clerk must go from zero to hero after accidentally unleashing the forces of evil from a cursed Colecovision game… Max Jenkins’ gaming fantasies collide with reality when a legendary “lost” installment of the Nether Game series appears on the store counter of his workplace, Fallout Games. Unbeknownst to Max, the game bears a “Curse of The Ages”, and in playing it, he has just unlocked the Nether, an ancient malevolent force of evil from the cartridge, upon his small hometown. Along with a mysterious masked man and his two best friends, Liz and Reggie, Max must figure out how to beat the Nether at its own game before it’s Game Over for humanity.

MVD Entertainment Group will release MAX RELOAD AND THE NETHER BLASTERS in theaters and on multiple VOD platforms this summer.

MVD Entertainment Group is a full service music and movie distribution firm, exclusively representing thousands of audio and visual products for DVD, Blu-ray, CD, vinyl, and digital rights, worldwide. MVD also exclusively distributes a growing line of merchandise including limited edition collectibles, tee shirts, and more. The company stays on the cutting edge of new media with a huge catalog of audio and visual digital rights, and by nurturing its direct relationships with the major digital and VOD platforms.