Food Network is amping up its schedule with a curated offering of premieres, encore episodes, and marathons of fan-favorite series to bring the comfort of food and entertainment to screens everywhere. From self-shot content with talent at home, to fierce culinary showdowns, epic finales, and much-needed mealtime recipe inspiration and company for those cooking at home, the network’s lineup aims to super-serve what viewers are craving most right now.

On Tuesday, April 7th, tune in for a very special episode of Chopped, “Beat the Judge: Alex,” at 9pm where contestants compete for a chance to face off against illustrious Chopped judge Alex Guarnaschelli in the final heat. Baseball season may be delayed but on Wednesday, April 8th join Guy Fieri in a new episode of Guy’s Grocery Games when three former Major League Baseball players Jeremy Affeldt, Rich Aurilia and Brian “Tito” Fuentes team up with GGG all-star judges at 9pm in hopes of hitting a culinary home run. Then, at 10pm, Guy Fieri opens up the Guy’s Grocery Games vault and takes a look back at one of the most fun tournament games to date in Behind the Games: Guy’s Superstar Grocery Games with fresh, new footage shot at home with Guy giving color commentary and behind the scenes tidbits on the tournament. Thursday, April 9th features back-to-back premieres in primetime starting at 9pm with The Great Food Truck Race: Gold Coast with Tyler Florence, and then at 10pm the epic grand finale of Vegas Chef Prizefight with Anne Burrell. On Friday, April 10th, a marathon road trip to Flavortown starts at 1pm, with a premiere of Triple D:Nation at 9pm. On Saturday and Sunday, viewers can spend time in the kitchen with their favorites with a treasure trove of comfort food premieres, encores and fan-favorite marathons.

Tuesday, April 7th features an all-day Chopped marathon including the five-part $50,000 Champs Challenge, leading into the premiere of the Chopped special episode “Beat the Judge: Alex”premiering at 9pm where competitors will vie for the chance to face off against judge Alex Guarnaschelli. Then, viewers can hang out with Alex in an exciting new episode of Supermarket Stakeout premiering at 10pm.

For those longing for a change of scenery, Wednesday, April 8th offers a chance to visit Ree Drummond in her kitchen on the ranch for a full morning of comfort food recipes on The Pioneer Woman from 9:30am-1pm featuring dishes like Lobster Mac and Cheese, Tex-Mex Tamale Pie and Hot Hawaiian Beef Sandwiches. Afterwards, Guy Fieri hosts a fun-filled marathon of Guy’s Grocery Games beginning at 1pm including the all-new premiere at 9pm of “Big League Teams” featuring Jeremy Affeldt, Rich Aurilia and Brian “Tito” Fuentes teaming up with GGG all-star judges in hopes of hitting a culinary home run. Then at 10pm, go behind the scenes of one of the most exciting GGG tournaments with Behind the Games: Guy’s Superstar Grocery Games fresh, new footage shot at home with Guy giving color commentary and behind the scenes tidbits on the tournament.

Viewers can hit the road from the comfort of their couches on Thursday, April 9th with adventurous marathons of Food Paradise from 10am- 2pm and Bizarre Foods America from 2pm-5pm. Then, join Bobby Flay in an action-packed marathon of episodes of Beat Bobby Flay from 5pm-9pm, leading into a night of premieres. At 9pm, the road trip continues on The Great Food Truck Race: Gold Coast where Tyler Florence meets up with the contestants in Las Vegas for a challenge-filled visit. Then, it’s the epic grand finale at 10pm when the Anne Burrell-hosted Vegas Chef Prizefight changes one contestant’s life forever.

Friday, April 10th features a three episode-stack of Supermarket Stakeout from 10am-1pm, leading into an all-day Guy Fieri road trip to Flavortown with a marathon of Diners, Drive-Ins and Dives from 1pm-4am featuring restaurants coast to coast, with a premiere of Triple D: Nation at 9pm showcasing Italian-inspired meals from Baltimore, Maryland, Park City, Utah and Cleveland, Ohio. 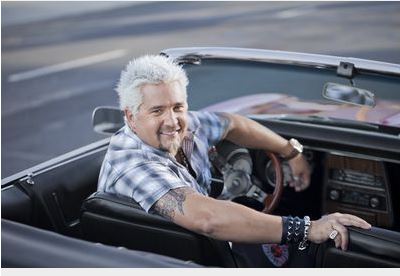 Saturday, April 11th features a morning of premieres, starting off with a new episode of The Pioneer Woman at 10am, where Ree Drummond packs a kitchen-equipment care package for her daughter, Alex. Then, spend an hour with the hosts of The Kitchen in a new episode at 11am with easy-to-make-at-home recipes such as Farfalle with Fresh Herbs and Goat Cheese and Steak with Guasacaca Sauce. At 12pm, don’t miss Trisha Yearwood and fellow country music artist Lauren Alaina making delicious dishes like Mini Roast Beef and Cheese Sandwiches and Loaded Taco Waffle Fries. Afterwards, catch the Chopped Champions Tournament marathon from 1pm-6pm, followed by an all-night marathon of Diners, Drive-Ins and Dives beginning at 6pm.

On Sunday, April 12th, visit Molly Yeh on the farm with a new episode of Girl Meets Farm at 11am featuring recipes like Spiced Chicken Pot Pies, Crispy Chili Brussels Sprouts and Halva Apple Pie Bars. Then, at 12:30pm, Giada De Laurentiis celebrates Easter Italian-style with a fabulous family feast on Giada Entertains. Continue the day with a Diners, Drive-Ins and Dives marathon from 2pm- 7pm. At 9pm, Buddy Valastro and Duff Goldman create cakes for the Aquarium of the Pacific that will transport viewers to an underwater world in a new episode of Buddy vs. Duff. Then at 10pm, Michael Symon and Clinton Kelly try to distract Bobby Flay on a new episode of Beat Bobby Flay.

Online, viewers can visit FoodNetwork.com for full schedule details, and across Food Network’s digital platforms access cooking short-cuts, recipes, tips and community. Whether for menu inspiration or to remake the ingredients already stowed in the pantry, FoodNetwork.com has fans covered. Fans can join the comfort food conversation and community using #WeCook to showcase some of the dishes they are making at home.

*All times ET/PT unless otherwise noted.