The comedy films of Stan Laurel and Oliver Hardy have been beloved around the world since they were first released between 1927 and 1940. So beloved that many of the available copies are blurred dupes printed from worn-out negatives. Now, the best of their short comedies and two of their finest features have been fully restored. They look and sound as spectacular as when they were first released. 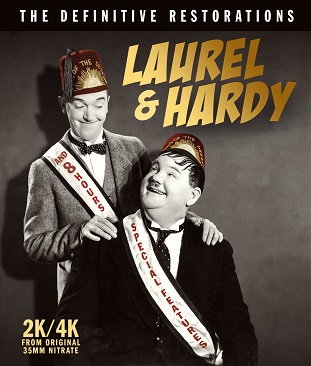 * NEW! 2K and 4K transfers from the finest original 35mm materials in the world.

* WORLD PREMIERES! Laurel and Hardy’s legendary 1927 silent “pie fight” film THE BATTLE OF THE CENTURY makes its video debut after being “lost” for 90 years! The only reel of L&H bloopers and out-takes, THAT’S THAT!

* EIGHT HOURS of EXCLUSIVE extras – 2,500 rare photos and studio documents, audio and film interviews with L&H co-workers, original music tracks and trailers plus a full restoration of their one surviving color film, THE TREE IN A TEST TUBE.

*Restorations provided by Jeff Joseph/SabuCat in conjunction with UCLA Film & Television Archive and Library of Congress.

For more information about the DVD and Blu-ray click the links.

Check out these side by side comparisons of the before and after restorations.