Set in a suburban fantasy world, Disney and Pixar’s “Onward” introduces two teenage elf brothers (voices of Chris Pratt and Tom Holland) who embark on an extraordinary quest to discover if there is still a little magic left out there. 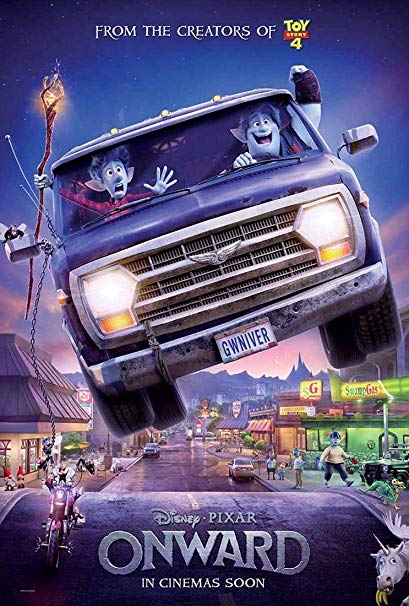 I’m not a Disney/Pixar die-hard. Don’t get me wrong, they have movies I absolutely adore, but I also think they have a few really overrated films. And to be honest, I think I’ve missed one or two as well. There hasn’t been a Pixar film I’ve gone out of my way to rewatch since maybe Up so whenever the hype train leaves the station for the latest Pixar film, I’m not usually on board.

That brings us to Onward, Pixar’s new film featuring the voices of Star-Lord Chris Pratt and Spider-Man Tom Holland as two elf brothers. Their father has passed and Holland’s character never had a chance to get to know his pops. On his birthday his mother gives him something their father had put to the side for them and it turns out their father was into magic. They live in a world where magic doesn’t exist because over time the creatures have learned to live without it. The film explains it quite well. When a gem is broken, the two brothers go on a quest to find one and be able to see their father for a day.

Part of me liked Onward because it felt a bit different than more recent Pixar films. Yes it gets emotional at times like Coco and Inside Out, but it relies more on the adventure to tell its story. The brothers bond even more together and both get emotional about the dad, but the quest is a ton of fun. Whether it’s Pratt’s character dealing with his van or them doing battle with other creatures, it remembers to have fun first and foremost. There are plenty of jokes especially with the dad only being half a body and even in animated form, Pratt is a lovable goofball. I could definitely see myself watching it again when it hits home video.

If the film falters at the box office (compared to other Pixar juggernauts), it’s because the movie seems skewed to a different audience than most Disney/Pixar projects. Pratt’s character is really into role playing games and folklore. He’s your typical Dungeons & Dragons type nerd who likes wizards and magic. Will most of the audience get some of his references? Probably not. His knowledge/nerd-dom helps them survive the quest, but will a younger audience be into it? That’s going to be the factor that will make this just a hit compared to the normal monster box ofice Pixar hit. Every Pixar film has had jokes for an older audience that go over the heads of children, but I don’t know if a 7 year old will be into this movie.

Overall I liked Onward and thought some of the animation was amazing. There’s one scene with the van and cop cars on a mountain that was just beautiful, but I think Disney/Pixar knew this might not be the blockbuster they are used to. Pixar films don’t come out this time of year and they are going to need the Tom Holland fandom to show up multiple times for this to make Toy Story 4 type money. It shouldn’t be the flop The Good Dinosaur was, but I wouldn’t be surprised if the worldwide total is well under the $800 million range Inside Out and Coco were.