In “Frozen 2,” the answer to why Elsa was born with magical powers is calling her and threatening her kingdom. Together with Anna, Kristoff, Olaf and Sven, she sets out on a dangerous but remarkable journey. In “Frozen,” Elsa feared her powers were too much for the world. In the highly anticipated sequel, she must hope they are enough. From the Academy Award®-winning team—directors Jennifer Lee and Chris Buck, producer Peter Del Vecho and songwriters Kristen Anderson-Lopez and Robert Lopez—“Frozen 2” features the voices of Idina Menzel, Kristen Bell, Jonathan Groff and Josh Gad. 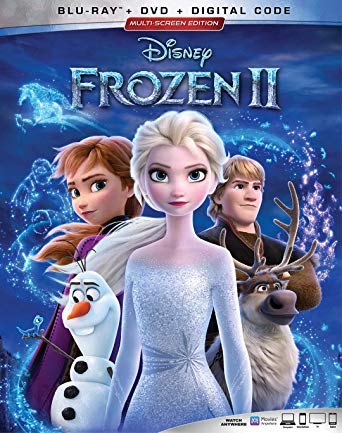 I’m clearly not the target audience for Disney’s Frozen II. I didn’t particularly care for the first film and passed on seeing this sequel when it was in theaters. But it went on to do huge money at the box office so I decided to check it out here on Blu-ray. With the main voice cast returning I figured I was in for a similar movie and it is, but isn’t at the same time.

Elsa, Anna, Kristoff, Olaf, and Sven all return and the film is filled with music (garnering an Oscar nomination for Best Original Song) and colors like the first movie. The animation is top-notch with great visual effects and costuming and set design. Fairy tale type worlds make for great animated visuals. Add in that one of the main characters is a snowman and well, it has a ton of style that adults can appreciate and kids will enjoy.

What makes this film different is it felt darker. Kristoff’s bit felt super weird and out of place. Some of the jokes seemed geared towards an older crowd or at least seemed like they wouldn’t land with a younger audience. Anna and Elsa’s parents are reintroduced through a bedtime story. The overall story arc feels heavier as well. There is still adventure, but instead of Elsa figuring out her full potential like in the first film, she seems to have more doubt and questions in this. The characters have grown and I think the audience needed to as well to enjoy the movie as much as they did the original.

Frozen II has many positives. Olaf telling us what happened in Frozen made me laugh and the visual effects are pretty darn gem perfect. I may not love the songs from these films, but you couldn’t escape Let It Go from the first movie and I have a feeling kids will be singing Into the Unknown on repeat viewings of this one at home. It was a monster at the theater and will be popular on home video as well. Disney’s animated Blu-rays are fantastic to look at and this one is no different. It looks and sounds great in HD and comes with a slew of bonus features (listed below). It’s pretty clear what I think of the film is irrelevant. It’s not for me and I’m fine with that. It’s a nice movie families can sit down and watch together especially fans of the first one. I’m not a Disney die-hard like a lot of people, but if your kids/family are, pick this up and enjoy.