SYNOPSIS
After the death of his young daughter, Thomas Dunn is a broken man. When his wife falls pregnant again, he cannot believe their luck. However, his joy is short lived, as on the very same day, the people of Earth become plagued with terrifying visions of the end of the world. When a gigantic, all-consuming alien mothership appears in the sky and launches a ruthless attack on Earth’s cities, chaos and destruction follows! Tom must find the strength and wisdom to save his wife and unborn child. However, first he must confront a shocking truth. A truth which threatens the key to the survival of the human race. 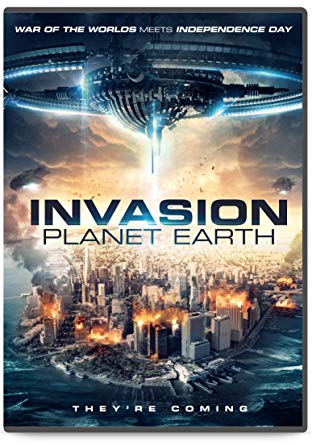 Now you could write off Invasion Planet Earth as just another generic science fiction flick with bad CGI. You can very easily actually. Honestly, some of the CGI is laughably bad. I mean, SyFy Channel bad. But then there’s a plot twist that saves the movie.

In hindsight that plot twist is actually foreshadowed earlier in the film if you pay enough attention which is hard to do with the bad CGI and acting. I put it all together after the twist is slightly hinted at when I remembered an earlier scene involving the wife. You can also sort of figure it out if you paid attention with the alien invasion. As the saying goes, hindsight is 20/20.

The DVD box says the movie is War of the Words meets Independence Day. Now isn’t that pretty much all sci-fi films involving aliens? And I also sort of question that statement. Yes aliens come down, but we spend a big chunk of the movie with the lead husband character and three other characters that have mental health issues. There are dream sequences with them that help lead them to the truth. Every once in a while an alien ship might come at them, but with these scenes, it’s more a psychological film than alien invasion.

Invasion Planet Earth isn’t great. I don’t think I’m familiar with any of the actors involved. The special effects are something to behold and not in the good way, but so many of us have watched enough SyFy or bad effects movies that it’s almost a genre (or subgenre at least) in sci-fi or horror movies. It’s probably getting more credit than it deserves for a having a surprise twist because I had no expectations for the flick and it was so laughably bad until then that it trying to surprise the audience actually worked on me.