Two vampires realize their food source is in jeopardy when alien creatures land on earth causing humans to become rabid zombies. They must battle cannibals, gun toting nuns, aliens and the undead if they want to save the world. 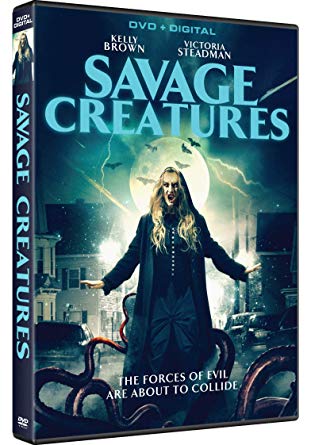 Savage Creatures is a perfect example of a movie that’s “So Bad It’s Good”. It starts out with a mother and son picking up a girl, drugging her, chopping her up and eating her. Yup we open with cannibals. Then they see two women walking down the road and offer them a ride and shower/food at their home. The two women start to get a bad vibe and end up drugged as well.

Plot twist! These two women are vampires and turn the tables on the cannibals. But then the radio is talking about meteors crashing to Earth and now there are aliens! And not just aliens, but these aliens turn humans into zombies! So Savage Creatures has cannibals, vampires, aliens and zombies! I almost forgot the priest and mute nun who use guns to shoot zombies.

The movie is as ridiculous as it sounds plus the special effects make effects in a SyFy movie look like Star Wars. The aliens are laughably bad. The cannibal guy hacks up a girl with an ax yet there is no blood anywhere. He doesn’t get blood on him or anywhere besides the bathtub. The entire movie uses post-production muzzle flashes and gun shot effects with CG blood. It’s so bad.

Then there is the acting. I’m not sure who the two lead vampire women are and I doubt they will become household names. The cannibal guy forgot he was supposed to be dead in a bathtub scene that you see him close his eyes when the blond vampire girl walks in. I had to stop and rewind it and watch it over and over again it was that bad. The priest character is a giant stereotype. The nun character doesn’t even talk so I guess I can’t complain about her acting.

All that being said, I’d be lying if I said Savage Creatures wasn’t at least entertaining to watch. It’s like the writer/director threw darts on a wall full of movie ideas and mashed them all together regardless if it made sense or not. Spoiler alert, it doesn’t. The only thing lacking for it to be a full blown enjoyable B-movie is nudity. It needed some unnecessary nudity to checkmark all the boxes of a truly great So Bad It’s Good.