Featuring Lloyd Webber’s iconic music and a world-class cast of dancers under the guidance of Tony-winning choreographer Andy Blankenbuehler (Hamilton, In the Heights), the film reimagines the musical for a new generation with spectacular production design, state-of-the-art technology, and dance styles ranging from classical ballet to contemporary, hip-hop to jazz, street dance to tap. 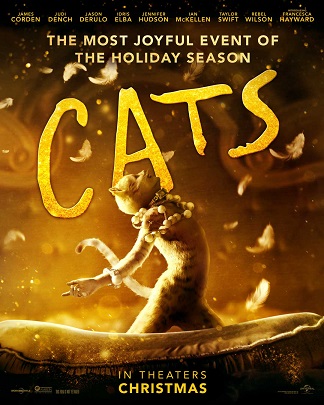 I had never seen the stage version of Cats. I’ve never read the source material it’s based on either. So me not enjoying this movie version of Cats is 100% understandable. I’m clearly not the target audience and I thought the trailers for the film were pretty horrifying so I wasn’t supposed to like the movie. I’m fine with that. We can all accept someone not liking a piece of art when that art wasn’t made for them in the first place.

The big issue with the movie is that the people who should like it simply don’t. I saw the movie with three friends that all have theater backgrounds or at least have seen the stage show or enjoy stage performances. None of them enjoyed it. In fact most of us kept looking at each other during the movie because we could not believe what we were seeing. It’s somehow even worse than the trailers.

When the first trailer dropped, to say it was crucified is being polite. Director Tom Hooper explained the CG wasn’t fully done and the movie itself didn’t have its final cut until this week. After seeing it, I’m not sure if it is finished. In the stage version humans dressed up in cat costumes and sang and danced on stage. In this movie version, it looks like human faces were put onto CGI bodies. None of it looks right. In fact there are times where the feet of characters don’t look to be touching the ground and sometimes the human faces don’t seem to match the movement of the heads. They say it was all shot on a sound stage, but everything besides the faces look 100% computer generated. I’m not a huge fan of CGI worlds in the first place so I’m fine with not loving the look. There is a generation of people who grew up on CGI and can accept it, I’m just not into it.

If the look was the only problem with the film that would be fine, but I’m honestly confused at how a project with this much talent made a trainwreck of a film. Hooper himself is an Oscar winner plus look at that cast listing below. See those names? That is A-list material right there. Jennifer Hudson is fine in her role (she can handle singing and stage performances with ease) and I thought the lead actress was solid too. She’s the principal ballerina at The Royal Ballet so her body movements are perfect for the movement of a cat. But the rest of the cast is pretty questionable. Someone at the screening said Judi Dench looked like the Cowardly Lion from The Wizard of Oz and that’s accurate. I love Idris Elba but he shouldn’t be in this. Rebel Wilson plays an overweight cat and I completely forgot she was even in the movie. Taylor Swift fans shouldn’t get their hopes up because she’s in it for a brief time belting out one song. It’s monumentally shocking that this group of people made this movie.

Cats was made to be an awards darling. A-list cast. A-list director. Hollywood loves musicals. Hooper gave us the Oscar winning Les Misérables in 2012 so this should have been an award worthy slam dunk. It’s not. One song was nominated for a Golden Globes award, but don’t expect this to do anything during awards season. Critics are killing it. The crowd I saw it with was as confused as the rest of us. It’s crazy how horrifying it kind of is. It’ll get people talking, but not in a good way. The only thing I took away from the film is that “A cat is not a dog” thanks to Judi Dench.