Not a lot this week for us so I’ll start with the biggest release I got so far, Hustlers. The film was a pretty solid hit at the box office with a lot of buzz especially for Jennifer Lopez’s performance. There was even talk about her being nominated for awards. I missed it at the theater and after finally watching it at home, I must have seen a different movie than others. I don’t get the hype for it. It’s fine, but it’s a movie we’ve seen plenty of times before. Other than it being an all-female cast, it’s a story we’ve seen in Boiler Room, The Wolf of Wall Street and other movies. It’s based on a true story and is about a group of strippers who start drugging men and robbing them after the stock market crash earlier in this century. They were making decent money off guys at the strip club, but when the financial market took a nose dive, guys weren’t going to the club or spending as much so they started drugging their drinks, swiping their credit cards and living off these men. The name of the film makes sense because they try to live large hustling these men, but how is that any different from Leo hustling people with junk stocks or any other movie? Is it simply because they are women? And as far as J-Lo goes, sure her introduction is pretty great, but award worthy? No. It’s a fine movie, but it’s definitely over hyped to me. I wouldn’t go out of my way to watch it again and it’s certainly not the year’s best movie like the packaging says.

Second we have The Loudest Voice, a 7 part miniseries that aired on Showtime starring Russell Crowe as Roger Ailes. Ailes was a political consultant and television executive who helped launch Fox News. Each one hour episode involves one particular timeline. It opens with Ailes leaving CNBC and being hired by Rupert Murdoch to get Fox News off the ground. Then it gets into 9/11 and wars in Iraq and Afghanistan followed by Obama’s election, his re-election and Donald Trump. Ailes was a conservative who wanted Fox News to take on the left leaning bias of CNN and other news outlets. He was also accused of sexual harassment which the series doesn’t hide. Crowe is simply amazing in the role. He’s one of my favorite actors going and he’s brilliant here. He should land many award nominations for his performance. The cast also include Seth MacFarlane, Annabelle Wallis, Sienna Miller, Naomi Watts and more. It wasn’t an easy binge because it’s pretty heavy material, but Crowe is so damn good in it I finished it over two days. It mixes in actual news footage which really helps set the tone of the series as well. If you missed it when it aired, it’s worth the watch. 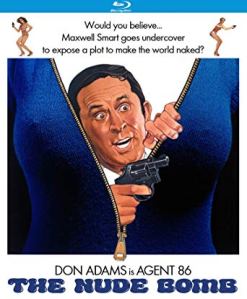 Third we have The Nude Bomb, sometimes referred to as The Return of Maxwell Smart. This was a 1980 theatrically released movie based on the hit Get Smart television show. It was not a success at the box office. The TV show had stopped airing ten years prior and if you aren’t familiar with the TV series, you probably won’t understand most of the movie. Don Adams plays the bumbling Maxwell Smart/Agent 86 and the plot to the movie is that KAOS (the bad guys) want to set off a bomb to remove clothing so they can be the only supplier of clothing in the world! Adams and one other cast member are the only two to return from the TV series. Mel Brooks (who created the show) had nothing to do with the movie and it shows. Watching it today, it’s pretty bad. The special effects aren’t good (there’s a scene with Smart and a parachute that’s laughable) and most of the beloved catchphrases seem played out. It’s super cheesy whereas the series was fun. The series was a play on James Bond and the like. This film seems like a play on the series. I did like seeing the original Battlestar Galactica guys in the Universal Studios scenes, but overall it didn’t work for me. But if you loved Get Smart, you should still add this to your collection.

Next is Fritz Lang’s Indian Epic which consists of the films The Tiger of Eschnapur and The Indian Tomb. Lang returned to Germany to direct these two films which involve architect Harold Berger, a Maharajah and an Indian dancer with European roots. The first film introduces us to Harold and he saves the dancer from a tiger attack en route to the palace. The Maharajah falls for the dancer named Seetha who of course falls for Harold. The Indian Tomb continues the story and adds Harold’s relatives, a supposed death and a dungeon. I won’t spoil the story for those who haven’t seen the movies. The second film contains the infamous Snake dance performed by Debra Paget. By today’s standards the movies are racially insensitive. They are clearly white Germans with dark make up on to look Indian, but these movies are 60 years old at this point. You’re better off looking at them from a historical point of view. They clearly influenced a generation of filmmakers and lead to films like Indiana Jones. Plus this new release looks fantastic. They have gone through a 4K restoration and they look and sound great. Fans of Lang will love this release. 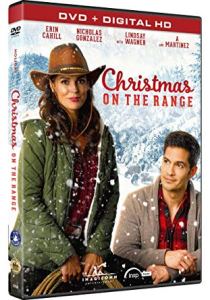 Last we have Christmas on the Range from Mill Creek Entertainment. Now I’m the last person who should be reviewing movies like this. I’m cynically jaded and these holiday films are for people like my sisters and mom who eat them up. So when I watch them I try to watch them as if I’m one of my sisters or mom and whether or not they’d like them. Considering most of them use the same formula, there’s a reason people watch them non-stop this time of year. This sees Kendall trying to save her ranch from being taken over by Brick McCree who with a name like that, you know is a bad dude! Enter Clint McCree, Brick’s son who just so happens to be a veterinarian who enters her farm just as she needs help with an animal birth! They fall for each other (of course) but maybe he’s a double agent and is helping is father! They ride horses and go to a Christmas tree lighting just as one does on a range. Ok clearly it’s not for me, but I did think the leads had decent chemistry and were cute together. You know what’s going to happen by film’s end, but those who like these movies won’t care.