Buried by treacherous conditions at the top of Mt. Baekdu, a policeman must brave the extreme conditions until he’s relieved from his post. When a group of thieves stumbles into the station in search of safe shelter, the night turns into a fight for survival as the two sides must put aside their differences to outlast the night. 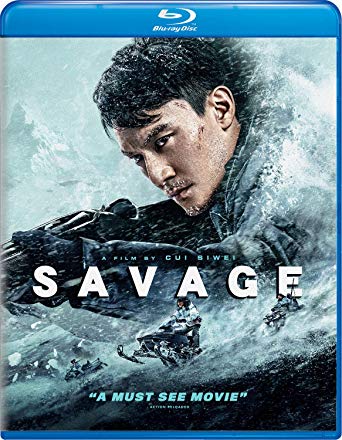 Savage is a little bit like The Grey, little bit like Cold Pursuit/In Order of Disappearance and a little like The Hateful Eight. All of these involve violence in cold weather areas and some sort of crime. This sees a cop in a snowy mountain area dealing with thieves, gold and his girl.

Overall I liked the movie, but it has some backstory that just didn’t seem necessary to me. There is a dinner scene with friends that somewhat confused me after a while because I expected something more to come of it. I kinda get the purpose it served, but ultimately the movie is about the cop, the thieves and the weather.

But once it focuses on the thieves, the snow and the conditions it was good. Siwei Cui wrote and directed this film and he also wrote The Island which I liked as well. He has a good way of using characters in groups and alone that make the film flow well. There aren’t a ton of characters in this, nor should there be, but every character on the mountain has a reason for being there and pushes the plot forward.

Savage is a good mix of action, intensity, and environment that makes for a solid drama. I can see Hollywood remaking it which is usually a good sign of a foreign film. If you don’t watch a lot of Asian films the cast and director might be new to you, but I was pretty familiar with them. Not a bad movie for something I wasn’t sure what to expect from.