American automotive designer Carroll Shelby (Matt Damon) and fearless British race car driver Ken Miles (Christian Bale) battle corporate interference, the laws of physics and their own personal demons to build a revolutionary vehicle for the Ford Motor Co. Together, they plan to compete against the race cars of Enzo Ferrari at the 24 Hours of Le Mans in France in 1966. 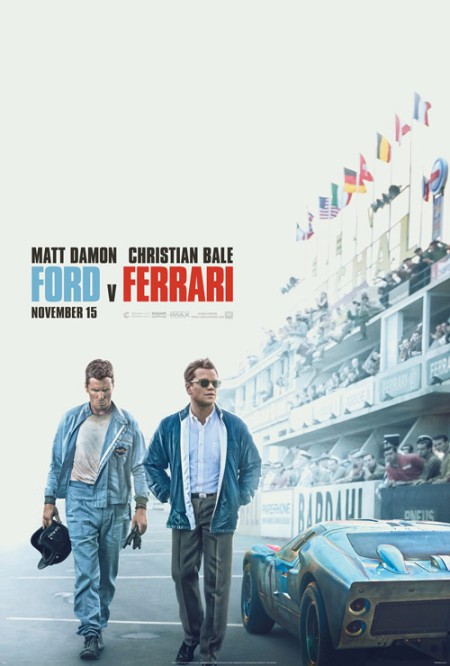 I’ll cut right to the chase, Ford v Ferrari is my favorite film of the year. As of right now, it would win my Best Picture award. It’s highly entertaining with great comedic relief and will have you on the edge of your seat until the very end.

I’m not much of an auto racing guy. I know Carroll Shelby because of his famous cars and knew he took on Ferrari along with Ford. I had no idea who Ken Miles was. The less you know about the story, the better the film is. You can probably guess some of it, but there are definitely a couple of twists and turns that will surprise you if like me, you weren’t familiar with the real life people and results of the race. If you aren’t a racing fan you should still thoroughly enjoy the film too. Again, I’m not much of a fan and I would 100% watch this movie again right away I enjoyed it that much.

That’s the thing with great sports movies, you don’t need to be a fan of that particular sport to enjoy the movie. This sports movie checkmarks everything you want in a great (sports) movie. It has an easy to root for underdog story. Sure Ford is a major name in the car industry, but at the time Ferrari dominated this type of auto racing. Carroll Shelby was a small time builder then. He had made a name for himself as a racer earlier in his career, but his racing days were over and here he is trying to make a car to defeat the titan of racing. Ken Miles was the wildcard. He was a talented driver, but was hot headed which lead to him not getting the sponsors needed to race for a living. This combination of hot head racer with smaller name builder is classic underdog storytelling.

Then there are the performances. This might be Matt Damon’s best performance since Good Will Hunting. Damon has always been a leading man, but you really see it here. He has to take on corporate interference with Ford and put up with the British driver’s antics. Speaking of the British driver, Christian Bale is amazing as usual. He is hands down my favorite actor and even in a supporting role he dominates the screen. He opened the 2010s with a Supporting Actor Oscar for The Fighter and could easily close the decade with another Supporting Actor win here. I rewatch The Fighter once a year or so for his performance and I can see myself rewatching this often for the same reason. The man is the best actor in the game. Period.

So the story is good and the performances are equally as impressive that leaves the rest up to Director James Mangold. Even if I don’t necessarily love the film exactly, I usually love what Mangold has done with it. I think his 3:10 to Yuma remake is one of the most underrated films of the 2000s. Ford v Ferrari is his best work to date. The racing scenes are suspenseful and put you right in the action. Literally, there are closeups of Bale’s head while racing that makes it feel like you are in the car with him. He should land a Best Director nomination for it.

If you can’t tell, I loved Ford v Ferrari. It’s without a doubt my favorite film of the year so far. Bale is just astonishing and Damon holds his own opposite him. With supporting roles from Jon Bernthal, Caitriona Balfe, Josh Lucas and more it has great side characters who provide comedy and drama. It’s a long movie like most movies in 2019, but it doesn’t feel excessively long like others this year. Normally I can find some scenes or side stories that movies could cut to get to the same end result, but there isn’t anything unnecessary in this. Honestly there is nothing more to say than…