One of this week’s home video releases is one of my favorite movies of the year, The Peanut Butter Falcon. It’s a delightful little film that I enjoyed quite a bit. It’s Shia LaBeouf’s best performance in years and newcomer Zack Gottsagen will charm audiences. The synopsis says it’s the story of Zak, a young man with Down’s syndrome, who runs away from a residential nursing home to follow his dream of attending the professional wrestling school of his idol. A strange turn of events pairs him on the road with Tyler (Shia LaBeouf), a small time outlaw on the run, who becomes Zak’s unlikely coach and ally. Together they wind through deltas, elude capture, drink whisky, find God, catch fish, and convince Eleanor (Dakota Johnson), a kind nursing home employee charged with Zak’s return, to join them on their journey. To me the film is much more than just the story though. Sure that story is sweet and fans of Mark Twain will love it, but the movie is also the performances and environment. Using small fishing towns and shorelines as a backdrop, the movie looks beautiful and quaint. You get the cast of characters you expect in small, Southern towns and it captures life outside the big city. This film will remind people that LaBeouf can give great performances when he wants. Speaking of likable, whoever discovered Zack Gottsagen needs an award. You 100% root for Zak to follow his dreams despite breaking out of a place with no money, no clothes and no supplies. He’s funny and honest and you absolutely want to see him succeed. He has great chemistry with LaBeouf and Dakota Johnson and I hope he gets a ton of offers after this. The movie has some issues, a backstory with Jon Bernthal ultimately means nothing. The ending is pretty quick as well, but overall I don’t have much to complain about with the film. It’s a nice, small movie we need more of today. It has a sweet story with solid performances and a great backdrop. 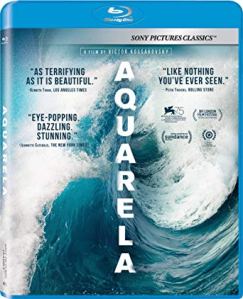 Second we have Aquarela. I didn’t realize it was a documentary when I first popped it in and it opens sort of like a drama with men getting cars out from under ice that crashed through while it melted. But then it spans the globe showing the power of water and how we’re screwing up the planet. I really wasn’t expecting a climate change movie so I might have had a different mindset for it had I known. The cinematography is breathtaking and I love water. I grew up on the ocean and have always lived near water so I respect its power, but I just wasn’t expected this type of movie. I should have looked into it before watching it. It’s a quick watch and you get the message of the film easily, I was just expecting something else. But you will love the photography of the film and how amazing nature is even when it’s at its most dangerous.

Third we have Yesterday Was a Lie hitting Blu-ray for the first time on its 10th anniversary. I had never heard of this noir-ish film which is a total head scratcher. It’s black and white and has all the aspects of noir with a setting and production design that looks like classic noir, but also seems to take place in current day (or when it was made at least). The story sort of time jumps with the lead character remembering things or maybe flashbacks. I don’t think I totally got what they were going for. She’s a private investigator with a partner and there’s a lounge singer and a genius. Plus Chewbacca (Peter Mayhew) shows up! I found it a bit confusing, but I’m sure there are some diehard fans out there who will eat up this remastered release.

Next we have Cross: Rise of the Villains. This is the third film in the franchise, but I haven’t seen the first two. You really don’t need to know much going in, it explains enough as the film goes along, but I do think if you are a fan of the series you’ll like it more than non-fans. I wanted to see it because the supporting cast are all B-list names I like seeing like Vinnie Jones, Danny Trejo, Eric Roberts, etc. It’s a comic book type movie with characters having abilities, amulets that provide those powers and people using those powers through comic books to help others. It might have the most post production muzzle flashes I’ve ever seen in film history. Every single gun shot has a post production muzzle flash. It’s kind of hilarious. Obviously the movie isn’t great, but if you like SyFy Channel type of schlock then this is for you. Most people won’t like it, but I have a soft spot for laughably bad movies especially with actors who come work on the movie for a day and aren’t even really part of the story. Definitely not good but I had fun laughing at it.

Scared of Revolution is a documentary on Umar Bin Hassan, one of The Last Poets. I had no idea who he was or what The Last Poets were, but if you know who he/they are then this is for you. It’s an honest look at a man who had many faults. He was a drug addict in the 1980’s that wasn’t close to his family. He had moved to New York to escape small town life and be revolutionary. He wrote poems and talked about racism and more. He got into drugs eventually and wasn’t there for his kids, but has since gotten sober and has tried to be there for his grandkids. They say The Last Poets were hugely influential in early rap and maybe that’s true, I have no idea. If you know of this man and The Last Poets then it’s something you would be interested in watching. 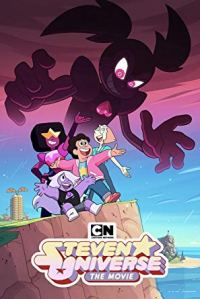 Steven Universe: The Movie is also out this week. If you read me often you know this is one of the shows that I understand why kids like it, but it has a cult adult following I don’t understand. It’s colorful with fun characters yet adults tweet about it all the time! The synopsis is Steven thinks his time defending the Earth is over, but when a new threat comes to Beach City, Steven faces his biggest challenge yet. What follows is all kinds of adventure and songs and everything you expect from the show but in its first movie. I only watch it when it comes my way to review but I actually know some diehard fans of it. I wasn’t expecting it to be so musical and I did think it continued the story from the series pretty well. Fans will definitely be picking this up.

Sticking with TV, Star Trek: Discovery Season 2 is out this week. Season Two sees the U.S.S. Discovery teaming up with Captain Pike to investigate seven mysterious red signals and an unknown being, The Red Angel. The show 100% captures the Star Trek world aesthetic, but just isn’t as good as the original or The Next Generation. It’s hard to get beyond those first two series because I haven’t loved other series since then either. But it is still watchable and has all the quirky characters you come to expect in a Star Trek series. It does rely more on today’s effects than the practical effects that I find cheesy but more to be Star Trek-esque. I do think it relies a bit too heavily on its captain, Michael Burnham, than previous series too. Sure we all know Kirk and Picard, but it’s the supporting characters, Bones, Wesley, etc., that to this day we remember as well. But overall I do enjoy it and will continue watching it when it comes my way.

Despite having a cast of Michelle Williams, Julianne Moore and Billy Crudup I had never heard of After the Wedding. After watching it, I understand why. It should be called Drama: The Film because it piles on so much drama into one story that Lifetime movies are jealous. Williams plays an American who runs an orphanage in India. Moore invites her to New York to give her money for the Indian orphans. Ok fine, I can go with that. Then Moore invites her to her daughter’s wedding and Williams sees Crudup’s character. They obviously have a past because of how they look at each other. I don’t know how much more I should give away because of spoilers, but trust me, there’s more. It gets into every drama trope you can think of. There’s an illness. There’s a much deeper past with another character involved. It’s all just too much. If you aren’t familiar with the movie either, it makes sense that you haven’t heard of it. Despite having two well respected lead actresses, it’s just way over the top with drama on top of drama. A surprisingly big swing and a miss for me. Turns out it’s a remake of a Mads Mikkelsen film from 2006 as well.

Last we have Santa with Muscles. This came out last week I believe, but I didn’t get my copy until Friday. This is the 1990’s movie with Hulk Hogan and a young Mila Kunis. Is it a good movie? Absolutely not. Is it so bad it’s good? Maybe. I hadn’t seen it since the 90’s so I’m glad Mill Creek has it out on Blu-ray. It’s laughably bad, like all-time bad, but it might be cheesy enough to enjoy. Hulk Hogan plays a rich guy who bumps his head and is convinced by a mall elf that he’s Santa Claus. He then tries to save an orphanage from being taken over by Ed Begley Jr. who wants what’s in its basement. Clint Howard plays a bumbling cop. Don Stark, who would later go on to co-star with Kunis in That 70’s Show, plays the elf. It’s so ridiculous, but has a cult status in the so bad it’s good world. If you haven’t seen it, you need to.