MIDWAY centers on the Battle of Midway, a clash between the American fleet and the Imperial Japanese Navy which marked a pivotal turning point in the Pacific during WWII. The film, based on the real-life events of this heroic feat, tells the story of the leaders and soldiers who used their instincts, fortitude and bravery to overcome the odds. 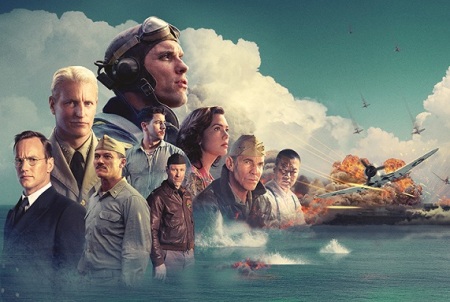 A friend of mine asked me how Midway was. I asked them if they had seen the movie Pearl Harbor, they said they had so I told them they pretty much have seen Midway as well. I was hoping for a movie closer to Dunkirk than Pearl Harbor, but overall the film is at least watchable.

The biggest issue for Midway (like 90% of movies this year) is it’s way too long. It’s over 2 hours long and it shouldn’t be. Well it could be that long if they added more to it and cut unnecessary parts. Even in a movie about the Battle of Midway this movie still has the bombing of Pearl Harbor in it. Yes Pearl Harbor is one of the most devastating events to ever happen on US soil and it’s what launched us into World War II, but this movie is about Midway. You don’t have to show the attack at Pearl Harbor. Put us into the events following it, the communication breakdown that lead to the attack when some people said it was going to happen and then get into the events leading to Midway. You cut easily 15 minutes off the runtime by not showing the Pearl Harbor attack which we have seen in many movies already including the Michael Bay version.

As much as I like Aaron Eckhart, ultimately his entire character/subplot is pointless to this movie as well. He plays the leader of the pilots that bombed Japan and he crashes into Occupied China. This is maybe 30-45 minutes into the movie. Then you never see him again. The credits explain who he is and what he accomplished, but what exactly did it do for the film? I had completely forgotten about him until the end.

Like most Roland Emmerich films at this point, Midway is his latest CGI-fest. The cost of this movie would be a billion dollars if they used real planes, bombs, battleships and carriers, but in 2019 can’t we make some more realistic CGI battles? I understand Emmerich is known for CGI heavy films, but in a historical movie about bravery it should look better. Some of the plane scenes, especially the dive bombing, looked way too fake. I know they are fake, but after a movie like Dunkirk, I want more realism in war movies now.

But the thing the movie does best is personalize the film. A lot of war movies are fictional, even when based on real events, and use composite characters that take 2 or more real life people and combine them into one super character (Patriots Day I’m looking at you). This shows you real life people and what they did. I’m sure they Hollywood-ized things a bit, but each actor plays a real person and the movie ends telling you a bit more about them and their lives after the battle. It shows the humanity of war, the balls you need to get into a plane (not a jet, a plane) with a bomb strapped to it and two machine guns (not missiles). There’s a reason we call these men The Greatest Generation.

It seems like I have more negatives than positives for Midway and that might be true, but I did find the movie watchable. It’s not great and I don’t know if I’d go out of my way to watch it again, but I’m glad I saw it on the big screen. I’m also glad they kept most of the love story out of the film too. You see Mandy Moore and other wives at home, but it didn’t Pearl Harbor a love story in it for the sake of having one. There are some questionable CGI scenes and one really bad Nick Jonas scene, but at this point you know what to expect from a Roland Emmerich flick.