More than two decades have passed since Sarah Connor prevented Judgment Day, changed the future, and re-wrote the fate of the human race. Dani Ramos (Natalia Reyes) is living a simple life in Mexico City with her brother (Diego Boneta) and father when a highly advanced and deadly new Terminator – a Rev-9 (Gabriel Luna) – travels back in time to hunt and kill her. Dani’s survival depends on her joining forces with two warriors: Grace (Mackenzie Davis), an enhanced super-soldier from the future, and a battle-hardened Sarah Connor (Linda Hamilton). As the Rev-9 ruthlessly destroys everything and everyone in its path on the hunt for Dani, the three are led to a T-800 (Arnold Schwarzenegger) from Sarah’s past that may be their last hope. 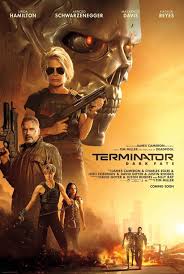 Terminator: Dark Fate is the Stars Wars: The Force Awakens of The Terminator franchise. This new film has the nostalgia of Linda Hamilton and Arnold Schwarzenegger and adds in new characters who are very similar to those characters we like from the previous movies.

A Terminator is sent back in time to kill Dani, the new version of Sarah Connor. Mackenzie Davis is the new version of Arnold’s character in T2, sent from the future to protect someone. There’s a new Terminator that’s even more impressive than the T-1000 from T2. So with all this sameness, the new movie must be good right?

Well that’s the issue, it’s not. Despite following a very similar formula from the first two films, the movie is disappointing. Unfortunately it’s hard to truly explain why I don’t like the movie because it would spoil a ton of plot points. I’ll try my best not to spoil too much, but I can’t promise anything.

My biggest issue (and it’s a problem with all these movies) is they always get the science wrong. This movie is a sequel to Terminator 2 which eliminates anything from Rise of the Machines, Salvation and Genisys. Sure they weren’t great movies, but we’ve already seen them so you have to ignore all of it. This then opens with a scene that takes place after T2 that if it happens would change so much that Sarah Connor talks about. They completely ignore any kind of Butterfly Effect theories. They go with a similar story that Looper used that is complete nonsense of characters from the future existing even though they shouldn’t.

Then Mackenzie Davis’ character explains who she is and her version of the future. It’s not the future Sarah was expecting, but is pretty much 95% the same. I don’t understand how it could be similar but my issues again are spoilers. Judgment Day never happens because Sarah and John stopped it in T2 yet something similar happens and pretty much the exact same stuff happens to humankind. Seems like lazy writing to me.

I will say the few action sequences were pretty good if not the same from previous movies. There’s a highway sequence similar to Deadpool which makes sense because it’s the same director. Like in T2 where Sarah and Arnold’s T-100 team up to take down the T-1000, there’s a similar scene in this with a 2 on 1. There is a plane and dam sequence that relies way too heavily on CGI and looks like a Transformers movie where you never really know what’s happening.

Terminator: Dark Fate should be the nail in the coffin for this franchise which is disappointing because it was once a great series. The acting in this is subpar. They make Arnold the comedic relief. They rehash most of the storylines just to introduce new characters to hopefully get a sequel. It was cool seeing Linda Hamilton being badass again and the new Terminator is impressive, but that’s about all I enjoyed from the movie.