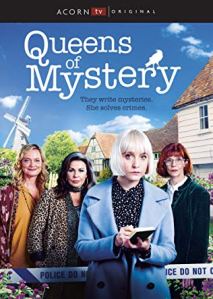 The “wickedly offbeat” (Parade), contemporary mystery series follows the adventures of three crime-writing sisters and their niece, Detective Sergeant Mattie Stone (Olivia Vinall). Using their knowledge of crime—both real world and fictional – together they solve murders in the picturesque English region of Wildemarsh. But no matter how many cases they’re able to crack, the unsolved mystery that still haunts the Stone family is that of Mattie’s mother’s disappearance 25 years ago.

Episodes 1 & 2, Murder in the Dark – Finds the newly promoted DS Matilda Stone dispatched to Hiddledean Hall to investigate a murder at the 15th Wildermarsh Crime Writer’s Festival. In a crime as strange as the fiction on display, the prestigious Golden Pick Axe Award has been found buried in the head of a prize nominee, and pages from his latest manuscript have been stolen.

Episodes 3 & 4, Death by Vinyl – Gives an insight into Cat Stone’s years in an 80s new wave girl band and her love affair with Nikki Holler, its lead singer. “Volcanic Youth” and their entourage have been invited to record a reunion album at an exclusive retreat not far from Wildermarsh – but it’s not long before one of them is found dead in the studio… strangled with a microphone cord.

Episodes 5 & 6, Smoke and Mirrors – Focuses on a local theatre where an adaptation of one of Aunt Jane’s books is being mounted. When a large sandbag falls, crushing one of the cast, Matilda works her way through her suspects – the larger than life cast and crew of the play, while her aunts do some investigating of their own, and uncover bribes and secret obsessions behind the scenes.

Queens of Mystery is a delightful little show filled with oddball characters that was pretty easy to binge. There are six episodes with three stories broken up over those six episodes. To me it kind of mixes in a lot of British shows and authors to make one series. It feels very Agatha Christie and also very Masterpiece Theater.

The first episode opens with Olivia Vinall’s character of Matilda Stone returning home to Wildermarsh to work for the local police department. She was raised there by her three aunts after her mother’s disappearance. She didn’t know her father so her aunts are her closest family. There she is put on an investigation of a murder of an author that just won an award, one her aunt was nominated for as well. The winner had written a new book and was going to read the ending of it before he was killed. Mattie must figure out who the killer is with the unwelcome help of her aunts. This storyline is the basis of the first and second episode.

The third and fourth episode revolve around the murder of a musician. One of her aunts was in the band back in the 1980’s and a documentary about the reunion of the band is also being shot while they record a new album. Jealousy, old secrets and more come to light while Mattie tries to solve the crime while her aunts butt in again.

The fifth and sixth episode finds a master thespian killed on stage right before the opening of a new play based on a book written by one of the aunts. The local art critic is also killed and it looks like many people are getting paid off. Mattie must solve the murders while the aunts help as well.

Olivia Vinall is delightful and spunky in the lead. I don’t know if I’m familiar with her, but she fits the part well. She also drives an awesome old car. If you watch a lot of these foreign crime shows like I do, shows like Doc Martin, Agatha Raisin, The Brokenwood Mysteries, you’ll like this. It doesn’t solve the mother’s disappearance and opens the door to ideas of who her father is so I expect future seasons to come my way.