Obviously the biggest home video release for the week is Avengers: Endgame but that got its own separate write-up so this is the list of everything else. First is Shadow, the latest Asian fantasy-drama. An injured military commander uses a lookalike as a shadow, someone to act like him and do his doings while he’s tucked away dying. His wife knows of the shadow and interacts with him as she would her husband. The commander wants to take down the young king in charge and also their enemies. The film is decent and has some solid fight sequences which you expect in a movie like this. It’s a period piece so there’s cool costuming and set design as well. The battle sequence towards the end is really good with lots of people and some one on one action as well. I don’t know if it’s something I’d watch again but it’s good for one watching at least.

Second we have The Reflecting Skin hitting Blu-ray in North America for the first time. This 1990 film stars Viggo Mortensen who plays the older brother of a boy who is convinced their neighbor is a vampire. Viggo returns home from military service and falls for the mysterious neighbor. His brother thinks she is the reason for people disappearing and dying. I’m not really sure what I thought of the film. It looks great and captures small town America perfectly, but a lot of it also felt out of place and I don’t know if it really explains itself either. There is a Cadillac with hoodlums in it that maybe represents Death or they are just hoodlums killing kids. Mortensen is good as always, but I’m not sure what I took away from it. The movie looks great on Blu-ray and comes with some solid bonus features so if you are a fan of the film, this is the best version (so far) to own. 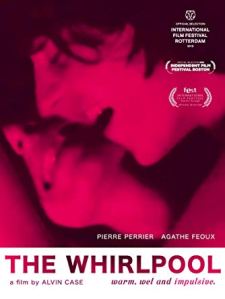 Sticking with headscratchers, third we have The Whirlpool. Two 20 somethings meet at Niagara Falls both from France. Well she was, he said he had lived there but I can’t remember if he himself was French. They spend a few days together sharing their stories, having sex, smoking and what not. She had an odd relationship with her therapist back home. He was driving around after losing his family. From what I looked up it seems like most of it was improvised without much of a script and it shows. Sure they are two easy to look at people, but not much happens. It was shot with inexpensive equipment including an iPhone in under two weeks and I can respect that but there isn’t much to the story besides a quick whirlwind relationship and then the end. I’m sure there are cinefiles that love the movie, but it’s not something I need to watch again. 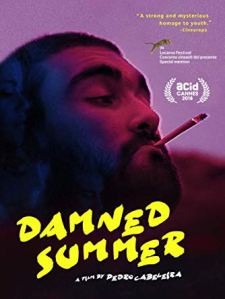 Then there is Damned Summer a film we’ve seen a thousand times before. It’s pretty much a bunch of twenty somethings in Lisbon partying, drinking, doing blow and having sex. No one seems to care about future careers and just want a good time. That’s all I got out of it and it’s not for me. I can respect someone making a film with no budget and using unknown actors, but the story isn’t original in the slightest and it’s completely forgettable.

Next is Rafiki, a Kenyan LGBTQ+ film. It was banned there at first for showing a lesbian relationship. The two leads come from rival families with their families running for local office. They go to church and try not to succumb to their desires but ultimately get together causing issues with their families. It doesn’t give you the 100% expected happy ending which I liked because we are so used to Hollywood movies with people staying together and everyone accepting each other. They have their struggles and go their separate ways at times which felt authentic and honest to me. 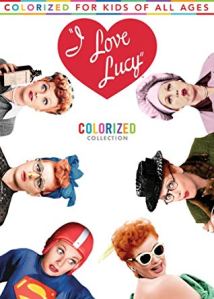 Now for something much lighter, I Love Lucy: Colorized Collection. The collection includes 16 full-length colorized I Love Lucy episodes, including classics “Lucy’s Italian Movie” (grape stomping), “Lucy Does a TV Commercial” (Vitameatavegamin), “Job Switching” (chocolate factory), “Lucy and John Wayne”, “Lucy and Superman”, “Christmas Show” and more. We here at the site always loved Lucy and these are great episodes. All are unedited and full length and are colorized in the style of the era they first came out. Decades later the show still makes me laugh and Lucy is an absolute icon. Hopefully newer fans will come from releases like this because no matter the decade Lucy is funny. 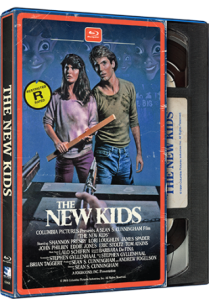 Now for a slew of Mill Creek Entertainment releases. I’ll start with one of their newer series I really like the Retro VHS Blu-ray series. First is The New Kids starring Lori Loughlin, James Spader and Eric Stoltz and comes from the 1980’s. I had never seen the film before which is shocking because of the cast. Loughlin and her brother lose their parents and move to an amusement park to live with their uncle. They are the new kids in school and Spader of course is the pretty boy bad guy of town who sells drugs and gets into fights with his friends. He doesn’t like the new kids especially after Loughlin turns him down. Stoltz is the nerdy guy who likes Loughlin. It’s very 1980’s but I also kind of liked it. The new slipcover is perfect for it.

White Line Fever gets the VHS Retro treatment as well. This 1970’s flick sees Jan-Michael Vincent as an independent truck driver taking on the corrupt system to get more work. Everything about this screams 1970’s when trucking was big. Vincent had leading man charisma and The Karate Kid’s Martin Kove is a tough bad guy in it. I’m sure this was a staple of 1980’s cable TV and that it has a cult following. Look at that sweet slipcover though! 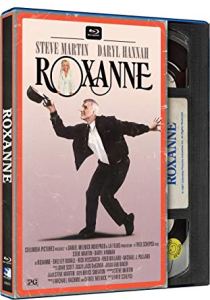 Steve Martin’s Roxanne also gets a VHS Retro slipcover. The 1980’s version of Cyrano de Bergerac found Martin as an intelligent and funny guy with a big nose who falls for Roxanne played by Daryl Hannah. He uses another man to try to date Roxanne and tells him what to say and how to act. I’m sure you know the story and it got Martin nominated for a Golden Globe. I hadn’t seen it in years and it still holds up pretty well. It should since it’s based on a timeless story. It’s not my favorite Martin film but it was cool catching up with it after a long time. 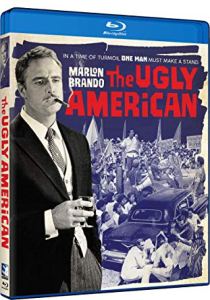 Mill Creek also has out Marlon Brando’s The Ugly American. Brando may have gone through some changes physically by the time he died but man could he act and he showcases it in this 1963 film. He plays an ambitious scholar who becomes the ambassador of Sarkan, a southeast Asian country. There is civil unrest there and a former friend might be the one causing it. The country is anti-American and his friend might be a Communist which gets him into hot water early on before his appointment. He tries to build a road and the whole thing is very politic. It’s also pretty timely and Brando is fantastic. I hadn’t seen the film before and I’ve been trying to catch up on earlier Brando performances that I’ve missed so I’m glad this came my way. 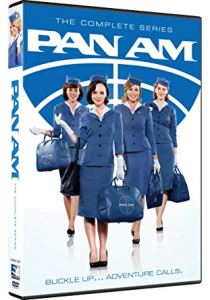 Mill Creek also has out the Complete Series of the short lived TV show Pan Am. It starred Christina Ricci and introduced the US to Margot Robbie. The series tried to cash in on that Mad Men nostalgia vibe and it never found an audience only lasting 14 episodes. It was based in the 1960’s and involved the flight attendants and pilots of Pan Am and their lives and more importantly, their lifestyles.  I didn’t mind it but I can see why it didn’t pan out. Ricci and Robbie were great as was the rest of the cast and critics seemed to like it but without the ratings it crashed and burned (pun intended). If you were a fan here is the complete series for a cheap price. 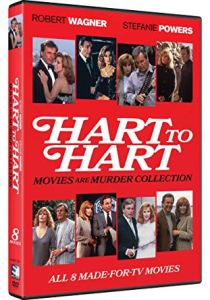 Sticking with TV, there is a Hart to Hart Movies Are Murder Collection out this week that features all 8 made-for-TV movies. Hart to Hart was a TV show from the late 70’s to early 80’s and this is the movies that came out much later in the 1990’s. Robert Wagner and Stefanie Powers returned to playing their TV personas and each movie runs about 90 minutes. Obviously if you were a fan of the show you’d be a fan of the movies and this is a great collection of all of them for fans. 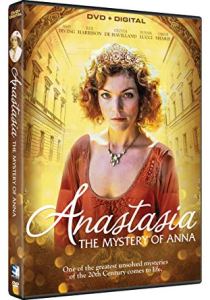 Anastasia: The Mystery of Anna was a mid 1980’s mini-series starring Amy Irving as Anna Anderson, who claimed to be Anastasia Romanov, the only “surviving” child of the last Czar and Czarina of Russia. I wasn’t familiar with the mini-series and it has some seriously fantastic production design, wardrobe and set pieces. Turns out it won a few Golden Globes and Emmys which makes sense because it looks fantastic and Irving is great in the role. You never know if you trust her or not plus the rest of the cast is good including Susan Lucci, Omar Shariff, Rex Harrison, and Olivia de Havilland. And most importantly a young Christian Bale! It was worth getting just for that alone. If you are a fan of the mini-series here is the entire series in one collection. 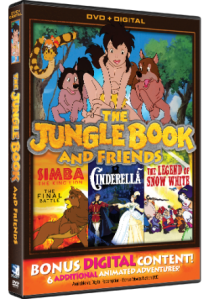 Mill Creek also has out The Jungle Book and Friends Collection. This consists of The Jungle Book, Cinderella, The Legend of Snow White and Simba The King Lion – The Last Battle. These aren’t the Disney versions we all know but are animated and came out in the early 2000’s. The stories are universal and if your kids like the stories they will like this. If you can’t afford the Disney versions then these will entertain the kiddos. It also comes with bonus digital movies including Welcome Back Pinocchio, Pocahontas I: Princess of American Indians, The Thief of Baghdad, The Three Musketeers, Hercules, and Robin Hood.

Last we have Belong To Us. This isn’t from Mill Creek and it came out last week but I didn’t get my copy in time. If you read me enough you know I’m not much of an animal person nor animal movies so this isn’t for me, but your family will like it. A sort of outcast girl has a dog wander into her yard and her dad decides to let her keep it. Of course the family grows to love the dog and it’s sweet and innocent. The dog was injured in dog fighting and she learns to take care of him and kids will like the dog. Parents will like the uncomplicated story and I’m ok with that.