To enter, email Murraymakercontests@gmail.com with your favorite Benedict Cumberbatch performance 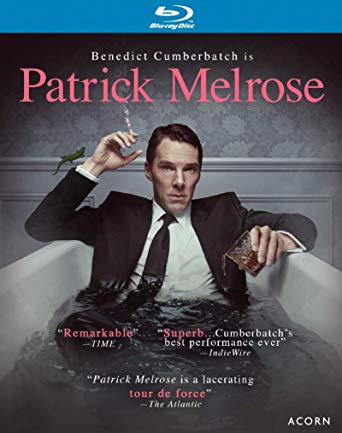 With five Emmy nominations and 2019 BAFTA Awards for Best Mini-Series and Best Leading Actor, the star-studded British miniseries PATRICK MELROSE makes its DVD and Blu-ray debut on June 18, 2019 from Acorn. Based on the acclaimed novels by Edward St. Aubyn, the five-part series tracks Patrick Melrose (Benedict Cumberbatch, Sherlock, Doctor Strange) from a privileged but deeply traumatic childhood in the South of France, through severe substance abuse in his twenties in New York and, ultimately, toward recovery back home in Britain. The miniseries aired on Showtime in the U.S. The DVD and Blu-ray 2-Disc Sets feature 5 episodes, plus bonus a behind-the-scenes featurette (5 min.) and a 36-page booklet with cast and crew interviews.

Benedict Cumberbatch delivers a powerhouse performance as English aristocrat Patrick Melrose in this “devastating and brilliant adaptation” (The Economist) of the novels by Edward St Aubyn. Chronicling the hilarious highs and devastating lows of his tumultuous life, this blackly humorous drama follows Patrick from his childhood trauma at the hands of an abusive father (Hugo Weaving, The Lord of the Rings films, The Matrix) and neglectful mother (Jennifer Jason Leigh, The Hateful Eight), to the peak of his heroin addiction, and his attempts to stay sober and support his family.

“Beautifully acted by an exceptional cast” (CNN.com), it also stars Blythe Danner (Meet the Parents), Allison Williams (Get Out), Jessica Raine (Call the Midwife, Partners in Crime), and Indira Varma (Game of Thrones).