To enter, email Murraymakercontests@gmail.com with your favorite Non-US television series. 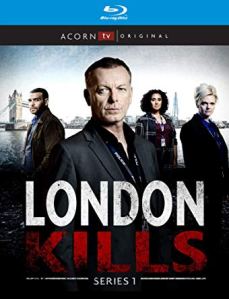 The Penrose Hotel faces new challenges as the funny, foodie drama returns. The late Leo Vincent (Iain Glen) watches from beyond the grave as his ex-wife, Gina (Dawn French), and widow, Sam (Emilia Fox), run the hotel he left behind. The piquant pair have managed to overcome their differences, until a handsome restaurateur (Vincent Regan) with a reputation for gobbling up smaller businesses arrives to stir the pot. Can Gina and Sam work together to save the Penrose, or will they end up vying for the same man—again?

From three-time BAFTA Award nominee Paul Marquess, the creator of Suspects, LONDON KILLS stars Hugo Speer (The Full Monty, Father Brown, Britannia), Sharon Small (Inspector Lynley Mysteries, Murderland, Trust Me, About a Boy), Bailey Patrick (Bodyguard, Casualty, EastEnders), and newcomer Tori Allen-Martin as a team of top murder detectives in the world’s most recognizable city. The five-part series, shot like a cutting-edge documentary, focuses on a different murder each episode, following the detectives as they uncover the truth behind the killing and an ongoing story involving the lead detective’s missing wife.

London’s best detectives solve its worst crimes in this sleek British mystery series from the acclaimed creator of Suspects. Veteran DI David Bradford (Hugo Speer) heads an elite murder squad, but he’s been on leave following the unexplained disappearance of his wife. In his absence, ambitious DS Vivienne Cole (Sharon Speer) has been leading the investigations, and when Bradford returns to work, the two clash over their methods and lines of inquiry.

Despite the tension, Bradford and Cole strive to solve complex crimes, along with DC Rob Brady (Bailey Patrick) and Trainee DC Billie Fitzgerald (Tori Allen-Martin). Together, the team probes the staged suicide of an MP’s son, a groom killed at his bachelor party, the corpse of a married man discovered by his mistress and a body washed up near the Thames. The only case Bradford can’t crack is the most personal to him – until one of their investigations uncovers evidence linked to his missing wife.