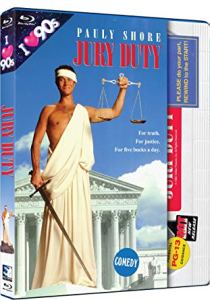 I’ve highly enjoyed Mill Creek Entertainment’s Retro VHS Edition Blu-rays. This latest group is fun because we start seeing 1990s films getting new slipcovers looking like VHS tapes we rented in the 1990’s. The best of the bunch is Jury Duty. At one point in time Pauly Shore had a run of quality movies like Son in Law, Bio-Dome, Encino Man and others like this one. Shore plays a jobless guy selected to jury duty who tries to extend the trial in order to get a place to crash, some food and cash. It’s not my favorite movie of his but I hadn’t watched it in years and it holds up pretty well. Obviously if you don’t like The Weasel you won’t like this, but it’s a great piece for the collection especially with these killer slipcovers. 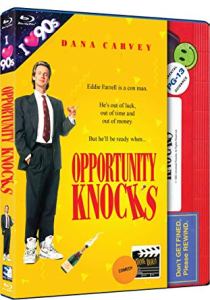 Sticking with comedy we have Opportunity Knocks. Like Shore, Dana Carvey once had a solid career. Eddie and Lou are a couple of con men on the run from a loan shark who crash at a house when they find out the homeowner is gone for a month and the house sitter can’t make it. Eddie pretends to be the missing home sitter when family stops by. It’s another movie I haven’t seen in decades so it was cool revisiting. Carvey may be remembered as Mike Myers’ sidekick but he did have some leading roles like this. 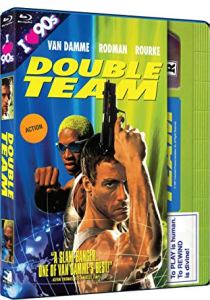 Third we have Double Team starring Jean-Claude Van Damme, Dennis Rodman, and Mickey Rourke. I’ve always had a soft spot for this film even though it’s not very good. JCVD plays a counter-terrorist who teams up with an arms dealer (Rodman) to escape from a penal colony and rescue his family from a terrorist (Rourke). The dialogue and acting are subpar by today’s standards (ok maybe even bad for the 1990’s), but the action is pretty good. JCVD was still in great shape and doing good action. Rourke was in great shape as well and Rodman was still playing basketball at the time. If you are a JCVD fan and don’t own it, this new slipcover edition is worth it. 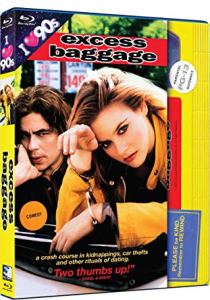 Last we have Excess Baggage. Alicia Silverstone, Benicio Del Toro, and Christopher Walken star in a movie about a teen girl who fakes her own kidnapping just to wind up kidnapped. Silverstone locks herself in the trunk of a car and the car gets stolen by Del Toro. Silverstone was one of the queens of the 1990’s, but now it’s Del Toro with the big career. It’s not as bad as I remembered, but I still don’t love it. Again though, if you are a fan, this new release with cool slipcover is worth it.