Everybody’s welcome at Ma’s. But good luck getting home safe. Oscar winner Octavia Spencer stars as Sue Ann, a loner who keeps to herself in her quiet Ohio town. One day, she is asked by Maggie, a new teenager in town (Diana Silvers, Glass), to buy some booze for her and her friends, and Sue Ann sees the chance to make some unsuspecting, if younger, friends of her own. She offers the kids the chance to avoid drinking and driving by hanging out in the basement of her home. But there are some house rules: One of the kids has to stay sober. Don’t curse. Never go upstairs. And call her “Ma.” But as Ma’s hospitality starts to curdle into obsession, what began as a teenage dream turns into a terrorizing nightmare, and Ma’s place goes from the best place in town to the worst place on earth. 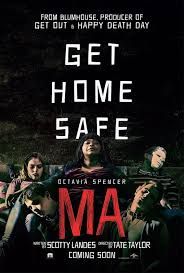 In a year where we see huge franchises close out decades long storylines, Ma could end up my most talked about film of 2019. It’s an absolutely bonkers movie that is completely unrealistic and unbelievable, but man is it a boatload of fun.

I’m going to get straight to the point, Ma is a horrific, trainwreck of a film, but I also kind of loved it. It certainly is something, just don’t ask me what that something is. Octavia Spencer gives her all in a movie that doesn’t deserve her all, but I’d be lying if I said I wouldn’t eagerly watch it again. I know calling a movie horrific sounds bad, but I walked out of the screening laughing, talking to others about it and mind blown over what I just witnessed.

Spencer plays a middle aged-ish woman who is asked by some teens to buy alcohol for them. The second time around she invites them to party in her basement so it’s safer. She seems like the harmless, loner type just looking for attention. The teens love it especially the new girl who is enjoying her new friendships and new guy friend.

Then we start to learn about Ma and her past. When she was in school she was done wrong and has always held a grudge against her classmates because of it. She’s not fond of her boss at work as well and slowly we see Ma turn. And boy does she turn. It goes dark and weird and Spencer acts the hell out of it. Her eyes should be nominated for Best Supporting Actress. I don’t want to say more because the less you know the better.

Does Ma have plot holes a mile wide? Yes. Does it completely forget about storylines and points it makes by the end of the movie? Also yes. Do I care they go out of the way to talk about missing jewelry and then forget about it minutes later? Nope. Octavia Spencer mixes Sissy Spacek in Carrie with Kathy Bates in Misery to give us the latest horror crazy and I had a blast with it. It’s an absolutely absurd film, but because of that it’s also…

Rating: Rated R for violent/disturbing material, language throughout, sexual content, and teen drug and alcohol use.