A thrilling and vibrant live-action adaptation of Disney’s animated classic, “Aladdin” is the exciting tale of the charming street rat Aladdin, the courageous and self-determined Princess Jasmine and the Genie who may be the key to their future. Directed by Guy Ritchie who brings his singular flair for fast-paced, visceral action to the fictitious port city of Agrabah, “Aladdin” is written by John August and Ritchie based on Disney’s “Aladdin.” The film stars Will Smith as the larger-than-life Genie; Mena Massoud as Aladdin; Naomi Scott  as Jasmine; Marwan Kenzari as Jafar, the powerful sorcerer; Navid Negahban as the Sultan concerned with his daughter’s future; Nasim Pedrad as Dalia, Princess Jasmine’s free-spirited best friend and confidante; Billy Magnussen as the handsome and arrogant suitor Prince Anders; and Numan Acar as Hakim, Jafar’s right-hand man and captain of the palace guards. 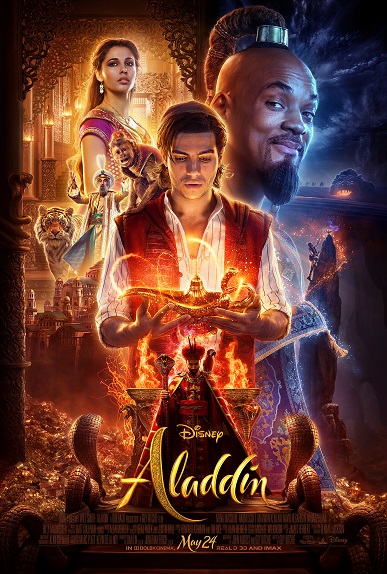 I’m not a big Disney guy. I haven’t seen the original animated Aladdin in over 20 years so needless to say, this new live-action Aladdin isn’t geared towards me. Just like the live-action Beauty & the Beast, I didn’t like this nearly as much as others around me.

Just like that film I had no idea this was going to be as musical as it is. I remember some songs from the animated film like A Whole New World and Friend like Me, but had no idea I was going to get close to a full blown musical. The film opens with a song, some characters break out into song and it takes me out of the movie. Obviously if you are a fan you’ll know to expect songs and dancing, but I didn’t expect as much.

I think the film’s biggest negative is its runtime. It’s way too long at over 2 hours. If it came in around an hour and forty minutes it would be tighter and a lot smoother. The ending actually feels super rushed which is a shame because it’s the best part of the film. It takes close to an hour before you even seen Genie and he was the only character I really remembered from the animated version thanks to Robin Williams. It’s very drawn out at times to really show off this world, but it’s slow because of it. It needed to be shorter so it could flow a lot easier.

There are some positives. I thought Naomi Scott had a solid enough voice for her performance. She’s absolutely stunning as Jasmine and her voice works enough for me. It comes across as a good stage voice which is very different than singing. Stage shows really need strong pronunciation to sell it to the cheap seats and I thought she did a good job with it. Nasim Pedrad as Jasmine’s sidekick brought some good comedic relief especially her scenes with Will Smith.

The production value and costuming/wardrobe are also through the roof. Being Disney they spared no expense to make the film look good. Wardrobe and set design are cool though it’s also just another CGI-fest in the end. I’m not a huge CGI fan and I understand you need to CG a flying magic carpet, but so much of it is just blurry computer effects like a Transformers flick. It’s considered live-action, but so much of it is in front green screen, what’s the difference?

Disney’s Aladdin will make a ton of money worldwide. It’s irrelevant that I didn’t think much of it because Disney has fans all across the Earth who will show up to buy tickets. I didn’t like the live-action Beauty & the Beast or the live-action Dumbo either so clearly none of these movies are for me. I do think families will enjoy the movie even if it’s way too long. You know whether or not you want to see Will Smith replace Robin Williams so if you liked the trailers you’ll like the film. I should probably start skipping these movies.