Synopsis:
Martial arts legend Donnie Yen stars as a former soldier recruited for his toughest mission yet – teaching a class of teen delinquents. As he kicks his way into their school and home lives, it becomes clear that his unconventional teaching style might be just what they need. 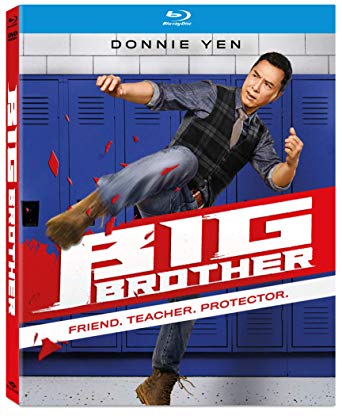 Big Brother is the latest Fish-Out-of-Water/a different kind of teacher flick to get made. We’ve seen all kinds of films like this before, Dead Poets Society, Kindergarten Cop, Freedom Writers, Dangerous Minds, Lean on Me and many others. This one just happens to star one of the biggest Asian martial artists in the world, Donnie Yen.

Yen plays a former US soldier returning home and wanting to make amends for past actions. He becomes a teacher at his old school and takes over a class of misfits. There are students without parents, students who don’t care about school and get into trouble, etc. Yen tries to reach them through different means while the school needs more funding or it will be closed. He gets to know the students personally and interacts with them to put them back on the right track.

I’m a huge fan of Donnie Yen and this is definitely one of his most different films to date. Best known for the Ip Man franchise or Rogue One to those who don’t watch much Asian cinema, Yen usually takes films where he can show off his fighting skills. Of course he does some great action sequences in this movie, but it’s more a story driven narrative.

Yes movies like Special ID and Chasing the Dragon are certainly story driven, but those are action dramas whereas this is a drama first and foremost. Yen does fight some MMA guys (which is very cool) and there’s a fight sequence in the school against gangsters, but he gets to act here more than just fight.

Donnie Yen is getting up there in age and maybe with films like Big Brother he’s following Jackie Chan’s career path of mixing in movies that aren’t as taxing on their bodies. I like Yen so overall I liked the movie. Sure we’ve seen it done before, but Yen is highly watchable and the fight sequences are cool. If you are a fan then check it out.