In this suspenseful sci-fi thriller, Keanu Reeves stars as William Foster, a neuroscientist on the verge of transferring human consciousness into a computer when his beloved wife (Alice Eve) and children are tragically killed in a car crash. Desperate to resurrect his family, William recruits a fellow scientist (Thomas Middleditch) to help secretly clone their bodies and create replicas. When William learns that he can only replicate three of the four family members, he makes a decision with fateful consequences. 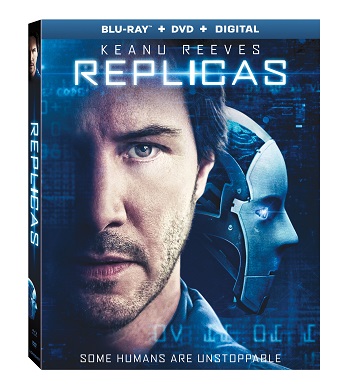 Replicas isn’t anything we haven’t seen before, but Keanu Reeves is good and the film overall is easy to watch. For a hundred years there have been movies about humans and robots and humanoids and cyborgs and every other term you want to come up with. This movie takes that concept and adds in a Sophie’s choice along with the standard idea of whether or not it’s moral and if there is more to life.

Reeves plays a neuroscientist on the verge of transferring human consciousness into a computer when his family is killed in a car accident. With the help of Thomas Middleditch he’s able to clone 3 out of 4 family members and upload the consciousness of the dead versions into their clones 17 days later. He of course is doing this off the books and tries to keep it all a secret.

This also leads to him trying to cover everything up. He responds to his family’s emails, texts and all that trying to cover his tracks and make his family whole again. He also needs to wipe out the memories of the daughter he wasn’t able to save from everyone’s existence. This being the first time he’s able to successful make the transfers things go wrong and the cloned versions start having issues and flashbacks. There is another twist in the movie, but I won’t get into that since that’s not even mentioned in the synopsis. That twist is pretty much the third act so I won’t ruin that.

Replicas feels like a lot of other movies out there in the science fiction genre, but that’s fine. I like sci-fi and I like the cast of Reeves, Alice Eve, John Ortiz and others. The film gets into the moral issues of death and removing death from lives, but it doesn’t get too deep into it which I respect. Sometimes these movies really dive into religious tones, but other than a scene or two between Reeves and Eve about an afterlife it doesn’t beat you over the head with it. I can see why the film didn’t do anything at the box office, but I can see it picking up steam on home video and streaming.