Weird week for us without a major release (at least one I haven’t gotten yet). Most of these films have been out before and have a new release. The best of the bunch is The Miseducation of Cameron Post starring Chloe Grace Moretz. This is a special edition release and I had never seen the movie before. Moretz stars as Cameron who gets caught with another girl in the back of a car and is sent to a religious group to have her gay prayed away. It’s based in the 1990’s and may seem absurd nowadays, but religious folk firmly believe you can have the gay taken out of you with prayer and what not. Moretz is really good in the role and it’s nice seeing her grow as an actress as she gets older. It was a Sundance Film Festival Grand Jury Prize winner and I can see why. It’s well made and well acted with an easy to follow story. If you haven’t seen it yet I do recommend it.

Next is The Vault starring James Franco, Taryn Manning, Francesca Eastwood, Clifton Collins Jr. and more. This definitely wasn’t what I thought it would be and I’m glad for that. It starts out as your basic bank robbery with two sister (Manning and Eastwood, daughter of Clint) and a group of guys trying to rob a bank run by Franco. When they don’t get enough money they are told about a vault in the basement and the movie takes a huge turn. If you don’t know what it is, I won’t spoil it because I had no idea either. It goes off the rails and I liked it. My biggest complaint is Manning though. She plays these tough chick characters and I don’t believe any of them. I don’t know if it’s the faces she makes that people buy into her being tough, but I never have in anything she does. A different actress there and I might have liked it more. Franco is pretty subtle in his performance surprisingly and I liked the twist it takes.

Third we have Vengeance: A Love Story starring Nicolas Cage. If starring Nicolas Cage makes you want to watch this then this is for you. If you rolled your eyes at the thought of another Nic Cage movie then skip this one. Me? I don’t mind most of them. This sees Cage as a cop in Niagara Falls who seeks vengeance for a woman who was gang raped in front of her daughter on the Fourth of July. Don Johnson plays the hired defense lawyer trying to get the rapists off so Cage turns to his own brand of justice! Does he “Nic Cage” the hell out of this performance? Of course he does, but it’s fine here. He’s not totally over the top and the movie we’ve seen a thousand times before but I know a lot of Nic Cage fans who must see everything he does so they will be checking out this one. 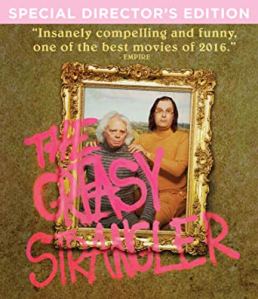 Fourth we have The Greasy Strangler: Special Director’s Edition. Ever pop in a movie and within 5 minutes know it’s just not for you? Well I got about 2 minutes into this and knew it wasn’t for me. I have no idea what the hell I’m supposed to take from this movie. A father and son live together and like to call each other bullshit artists. They do some sort of local walking tour and the son meets a girl. They have sex but she turns to the father later on. The father also gets greased up and strangles people and goes to a car wash to get clean. He’s also nude (yes fully) throughout a lot of the movie. I watched it and took a full day break from watching other movies because of it. But I’m sure someone thinks it’s a cult classic and will like this new special release.

Speaking of special releases, Mill Creek has a few more Retro VHS inspired slipcover Blu-rays out this week. First is Sheena starring Tanya Roberts who I always think of as Donna’s mom on That 70’s Show. If you ever watched any version of Tarzan and wondered what a female version would be like well Sheena is it. This 1980’s film finds Roberts as a blonde child raised in Africa after her parents die in a cave. She grows up with animals and swinging on vines and all that. But then an evil prince wants to take over the land and she fights back with a journalist and others. I’m sure I saw it back in the day but didn’t remember much of it. Roberts is stunning and sure it’s another movie by today’s standards that wouldn’t be considered PC but watch it for what it is. I love these Retro VHS covers.

Mill Creek also has out Songwriter in their Retro VHS covers. Willie Nelson and Kris Kristofferson star in a look at country music. They were longtime music partners but Blackie (Kristofferson) goes his separate ways until he must fight for his songs and reteams with Doc (Nelson). I’m sure I saw it when it came out, my dad is a huge Willie Nelson fan, but I didn’t remember it at all. Nelson is surprisingly good and Kristofferson always is. This is a cool release for fans of the film.

Also out this week are 3 more films in the Retro Afrika Collection. First is Isiboshwa about a group of boys searching for treasure and banding together to defeat thieves. Hostage is about a businessman’s wife being held hostage unless he will allow one of his warehouses to be used for drugs. Rich Girl is about a bodyguard watching a rich girl who doesn’t think she needs watching yet both are kidnapped. I thought Rich Girl had the better acting and production value of the group although that’s not saying much. It reminded me of a 1970’s Blaxploitation film and overall I didn’t mind it. Isiboshwa is sort of Home Alone with some of the ways they fight back. Hostage is what I expect in this series, not great quality or acting.