Pretty weird mix of releases this week and I’ll start with the biggest, Green Book. The recent Best Picture Oscar winner has seen some controversies and I’m not sure why exactly. I missed it at theaters and sure it wouldn’t be my Best Picture of last year but I’m not sure what everyone is outraged over. It stars Viggo Mortensen as Tony Lip, an Italian man from The Bronx hired to drive Dr. Don Shirley (Mahershala Ali) down south to perform at different gigs. Dr. Shirley is a famous pianist and Tony knows nothing about him. It’s Driving Miss Daisy, but with the races reversed. Both actors are quite good and the story is pretty simple so again, not really sure what the issue is. The black man is educated, famous and rich. The white guy is the typical Italian of the 1960’s yet people are calling it a White Savior flick. It’s based on a true story and yet people are still up in arms over it. Whatever, I don’t care. I liked it overall and found it surprisingly funny and charming. Ali and Mortensen are two of the best actors working today and you can see why in this. 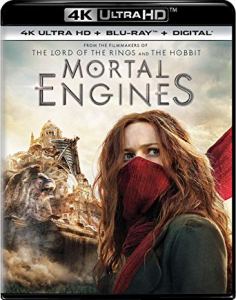 Second we have Mortal Engines. This Peter Jackson produced Young Adult adaptation bombed at the box office and I can see why. It looks fantastic in 4K, but there isn’t anything new we haven’t seen before in the genre. The film takes place hundreds of years in the future where society has pretty much collapsed and cities move around collecting resources and attacking smaller structures. It has a female lead hell-bent on revenge. It has a leader of London (Hugo Weaving) who wants more power. There’s a nerd who ends up sort of a love interest. Plus other side characters who really serve no purpose like the leader’s daughter. The re-animated creature hunting down the lead female character seemed out of place and the explanation of it is weird. Everything about the film is CGI which looks really bad at spots. I’m not familiar with the books so I can’t tell you the differences, but with all the money this lost worldwide, I doubt a sequel will come out. 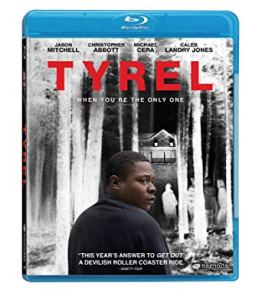 Third we have Tyrel which really wants to be Get Out, but confused me more than anything. The film is about a black guy going to the Catskills for a birthday party and realizing he’s the only black guy there. Everyone else is white and everyone is drinking. He feels out of place which I understand, but what’s the point of the movie? He drinks and tries to get away for a bit, but by the end he realizes there’s nothing weird going on it’s just a bunch of white dudes. There’s no real twist, no horror or social aspect to it. And why is it called Tyrel when his name is Tyler? I expected them to turn on him or something bad, but ultimately it’s just about a guy feeling out of place around people he’s never met. Maybe I missed something. 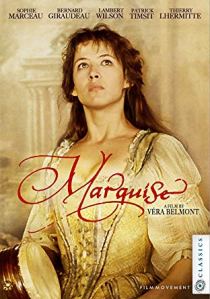 Next is Marquise hitting Blu-ray for the first time in North America. Sophie Marceau stars in this 1997 film about an actress from humble beginnings ultimately becoming a favorite of King Louis XIV. She marries and has an affair with a rival playwright working her way from street dancer to actress of stage. Marceau is stunning in the role and the period piece has great production value and set design. I’m not a huge fan of this genre, but I’m sure others will love this new release which has been restored. It’s a pretty solid release which reminds me of a Criterion Collection and it comes with a booklet. 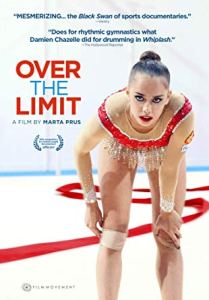 Over the Limit is a documentary about a Russian gymnast and what it takes to win Olympic gold. Margarita Mamum was leaving her teens which means her gymnastic career was almost over but wanted one more chance at Olympic gold. She had a ruthless coach that pushed her and boy do I mean pushed. Family medical issues were irrelevant. Life and friendships were irrelevant. It was Gold or nothing. I’m sure it might be eye-opening to some people in the US, but if you know anything about Soviet/Russian coaches, the coach fits the bill. We probably wouldn’t allow that type of pressure on our athletes, but Mamum is the world’s best for a reason. It’s a pretty straight forward documentary which shows Mamum’s up and downs and since I didn’t know anything about her I didn’t know the ending which I won’t spoil. 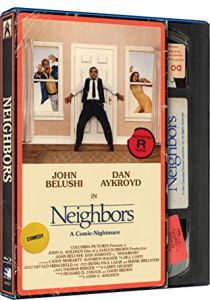 Neighbors gets a VHS Retro Blu-ray Slipcover release this week from Mill Creek Entertainment. This is not the Zac Efron/Seth Rogen film, but rather a 1981 comedy starring John Belushi and Dan Aykroyd. I had never even heard of this film which should be shocking because of the two leads. But after watching it, I can understand why it’s not considered a classic. Belushi is the “straight” guy with Aykroyd the wild card. Belushi’s quiet suburban life is flipped upside down when Aykroyd and his beautiful wife move in next door. I found Aykroyd more annoying than funny and most of the gags we’ve seen a thousand times before. I didn’t see the point of Belushi’s daughter character and ultimately the ending seems to come out of left field especially for Belushi’s timid businessman character. But I really dig these VHS Retro covers and I’m sure there are some diehard fans of the movie out there eager to pick this up. 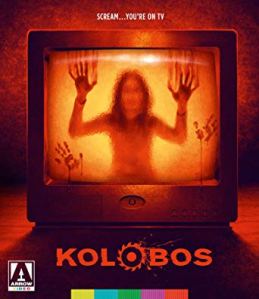 Speaking of movies I didn’t know existed, next is Kolobos, a late 1990’s horror flick which mixes The Real World style filmmaking with quality practical effects. The movie isn’t great and I don’t know if it makes a lick of sense but man there are some great kills in it. Everything about it is very 1990’s, the style, the filmmaking, the concept of strangers living together and being filmed, the hair, the clothes, the music, the dialogue. But I’m as 90’s as they come so I’m ok with that, I just wish I understood the film. A woman ends up in the hospital after escaping and being hit by a car, but with flashbacks you learn more about the situation and who she is. And that’s where I got lost. Was she part of it? She’s a bit crazy and on meds so did she dream all of it or part of it? I’m not sure if I got the point, but having skin peel off from acid, saw blades ripping through a chick and more will hold my attention and the practical effects are worth the watch. Another movie where I’m sure there are diehard fans and this new release of the film looks and sounds great. 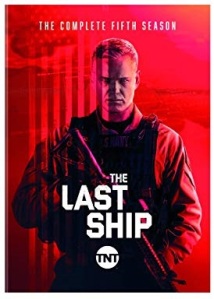 The Last Ship Season 5 is out this week as well. This is a show I only watch on home video and overall I like it, but it’s far from great. This is the final season and it’s been 3 years since the global famine. I liked how they had to go back to older weaponry in this. This sees a lot more politics coming into play now that countries are reforming and fighting for resources and occupancy. The team invade Colombia and one favorite dies. Overall the show was entertaining enough and easy to binge. If you like Tom Clancy books or the show Under the Dome you’d probably like this. 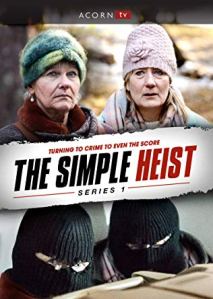 Last for TV we have The Simple Heist: Series 1. We’ve seen variations of this story before, The Full Monty, Weeds, Calendar Girls, etc. but this show is from Sweden and has two older women as its leads. One is a teacher going through a divorce after having an affair with another teacher. The other is a doctor going through financial struggles who meets a patient who doesn’t have much time to live. With both women needing money, they take the patient’s plan of a bank heist and well I won’t ruin where it goes. It’s both a dark comedy and drama and I can see a lot of people enjoying it. There are a couple of twists and turns but the less you know about it, the better off you are. Pretty smart show. 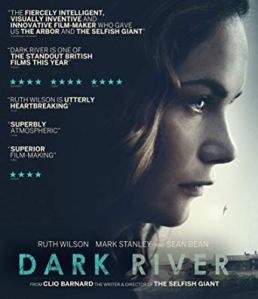 And finally we have Dark River starring Ruth Wilson from The Affair. Wilson plays a woman returning home to her family farm after her father’s death. Her brother still lives there and they clash over what to do with the farm and her return. It goes dark with using flashbacks to explain why Wilson’s character left the farm and what her father (Sean Bean) was doing. It’s a bit slow and was hard to understand (I had to put subtitles on because of the accent), but I thought it was well made and really liked the location. It made me want to visit an old farm with sheep. Wilson is good, but I’m not sure if I loved the backstory. I understand because of that she would leave, but that seems like a hot topic right now and used for that reason. Still, if you like Wilson or smaller British films, it’s an easy watch.