A lucky reader will win either Ackley Bridge Series 2 or Bang Series 1 . 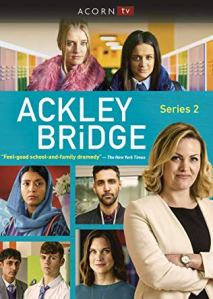 It’s the start of a new term at Ackley Bridge, and lives and cultures are still colliding at this high school that integrated a community of white and Pakistani residents. Smart student Nasreen (Amy-Leigh Hickman, EastEnders) tries to hide her sexuality behind a sham engagement, while her best friend, Missy (Poppy Lee Friar, Mr Selfridge), must shoulder the burdens of her drug-addict mother. Free-spirited English teacher Emma (Liz White, Life on Mars) embarks on an affair with a married staff member, and headmistress Mandy (Jo Joyner, EastEnders) introduces a strict academic regime that infuriates staff and students alike.

Loner Sam and his ambitious sister, Gina, live in a decaying steel town in South Wales. Since the death of their father 12 years earlier, the two have taken divergent paths. Gina has a promising career in the police force, but Sam’s life is going nowhere—until one day he gets his hands on a gun. Emboldened by newfound confidence, he begins to commit increasingly daring crimes.

Meanwhile, Gina is investigating the killing of a local car salesman. When the police connect the murder to Sam’s gun, Gina makes it her mission to find the owner of the weapon. But as she digs deeper, she discovers information about her father’s unsolved murder that will send shock waves through her troubled family.