First out this week is Disney’s The Nutcracker and the Four Realms which disappointed at the box office. I’m not exactly the target audience for the film, but after watching it, I’m not sure why audiences didn’t show up for it. It’s not my type of movie, but families that enjoy fairy tales and princess movies should have liked it. I think it was released too early. It should have come out around Thanksgiving just in time for school breaks and the holidays. Early November was bad timing because the movie checkmarks what you expect in this genre. The costuming and wardrobe are fantastic along with the set design. It’s a magical world with magical characters and it looks the part. The music adds to that magical world and there is some top-notch talent involved including Helen Mirren, Keira Knightley, Mackenzie Foy, dancer Misty Copeland and Morgan Freeman. Again, it’s not a movie for me, but I have young cousins that I will tell to watch it on home video. If I take anything from the film it’s that Mackenzie Foy is something special. She’s come a long way from the daughter in Twilight. The young actress is stunning and will make a name for herself once the tarnish of this bomb wears off. The Blu-ray looks and sounds fantastic and comes with bonus features like music videos and an interview with dancer Misty Copeland. I understand Disney didn’t want this to directly compete with Mary Poppins Returns or Ralph Breaks the Internet, but I do think the timing of its release hurt its box office because I didn’t think it was that bad. 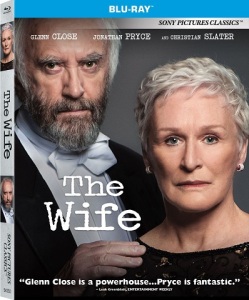 Second is The Wife starring Glenn Close and Jonathan Pryce. Close is nominated for Best Lead Actress at this year’s Oscars and I’m not exactly sure why. Her performance is fine, but she can do a role like this in her sleep. Close is one of the best actresses of her generation, but there isn’t anything overly special about this movie. Pryce plays her husband who wins the Nobel Prize and the pair fly to Stockholm to accept his award. Of course it’s not all that it seems, but I won’t spoil the plot twist. Price and Close are both good as is Christian Slater who plays a journalist who wants to write a biography about Pryce’s character. Max Irons is their son who feels like he lives in the shadow of his father and Harry Lloyd and Annie Starke play younger versions of the two leads in flashbacks. The movie is fine and you can kinda tell where it’s going. It’s good for one watch but Close has way better performances on her resume.

Also out is a complete series box set of the TV series, The Game. The show was a spinoff of Girlfriends and was about relationships with football players. It shockingly ran for close to a decade and I barely remember it. It reminds me a bit of Ballers although I like that show more. It has a lot more names in it than I realized including Tia Mowry-Hardrict, Brittany Daniel, singer Brandy, Coby Bell (who I know from Burn Notice), Pooch Hall from Ray Donovan, and others. It’s not a great show but I’m sure fans will like having the complete series in one collection.

Sticking with TV, next is Humans 3.0 (or season 3). This is the uncut UK Edition and is a show I like binging when it comes my way. It’s more science based than Westworld but nowhere near as popular. Season 3 starts with one year passing since Synths gained consciousness. Leo is in a coma and Max, Mia and Flash try to make peace with humans.  Laura is still fighting for synth rights and the police raid the Railyard. Agnes starts a campaign against humans and both sides fight throughout the season along with a new operation that could take down Synths. It’s only 8 episodes long so it’s a quick show to get through plus I don’t mind it. It’s a good mix of sci-fi and drama without going too over the top. I’ve seen all three seasons so if you haven’t seen the first two yet, do that first. 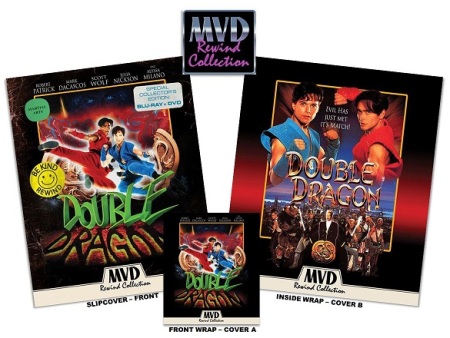 The next two features are films that came out last week but I didn’t get them in time. First is Double Dragon, the 1990’s film loosely based on the hit video game. I say loosely because there isn’t much connecting the film to the games which was a popular way of making these movies back in the day. It’s the latest from MVD’s Rewind Collection and man is it bad yet good. It’s super cheesy with awful 1990’s special effects and even worse dialogue but man was it fun to rewatch. I hadn’t seen the film since probably the 90’s and it stars Scott Wolf and Mark Dacascos as brothers in a post-apocalypse Los Angeles. It’s supposed to be 2007 which is hilarious watching it now. Julia Nickson (Rambo) tells them the story of the Double Dragon and how the medallion pieces must never be combined in the wrong hands. Robert Patrick (with bleached hair and awful clothing) is the rich bad guy who wants the two pieces. Alyssa Milano (with bleached short hair and terrible clothing) is a sort of freedom fighter who helps the brothers. Dacascos was a world renowned martial artist, I don’t believe the same could be said about Wolf and it shows. Most of the decent action sequences involve Dacascos and rightfully so. The effects, music, style, clothing, dialogue and everything in it is so totally 90’s but I loved the 90’s so I’m ok with it. It’s a terrible movie that you laugh at not with, but it’s also so bad you are entertained. This new release is pretty sweet and comes with all kinds of bonus features including multiple featurettes, trailers, interviews and more. If you have a soft spot for this movie, this is the version to own. It’s bad but also a lot of fun. 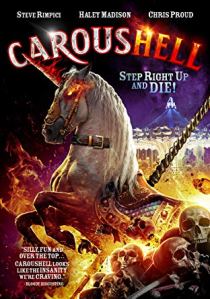 Also bad, but a lot of fun is CarousHell. You’ve mostly like never heard of it, but if you like D-Movie horror flicks with bad acting and surprisingly good effects, this is for you! I don’t believe I’m familiar with Steve Rudzinski’s previous films, but I had enough fun with this I might try to find them. A carousel unicorn comes to life and leaves his carousel after finally snapping from too many bad people and young kids. He seeks out the one boy who finally made him lose it and leaves a trail of bodies on his way. The acting is terrible, but that’s to be expected. There are a couple of great practical effects (including one head being ripped open) that really surprised me. The house party is full of terrible people and a pizza guy who just wants to get paid. There is a sex scene I won’t spoil, but yeah, it’s something. I like films like Sexsquatch so a movie about a killer carousel unicorn is right up my alley.