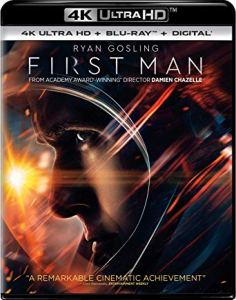 Not much for us this week so I’ll jump right in. First Man comes out this week and I loved 75% of it. That means I didn’t love 25% of it and I’ll explain. The film opens with a claustrophobic solo flight with Neil Armstrong (Ryan Gosling) that rattles the viewer and prepares them for some incredible visuals and intensity. But then the film gets into his family. Yes Armstrong was a family man and suffered a tragedy that I won’t ruin for those who don’t know, but it’s these scenes with the family I just didn’t care about. Hollywood has a tendency to take incredible feats and then try to humanize the people involved. Armstrong was the first man on the moon hence the title of the film. The family storyline just didn’t work for me. Having scenes with his wife and kids and scenes dealing with a funeral is fine, it was his life during this same time period, but so much of it feels forced. Claire Foy plays his wife and there are two scenes with her I would bet were made up for the movie. She goes to NASA to force them to turn the audio back on so she can hear what’s happening to Neil and there’s another scene before the Apollo 11 launch where she forces Neil to talk to his kids before he leaves. It feels so fake and forced. You get huge punches of intensity and drama then you get ripped out of that to go back to the home life. But man are those punches of intensity powerful. That first scene puts you in the cockpit with Armstrong, gives you his perspective and literally rattles around you. Then Neil becomes part of the Gemini and Apollo NASA projects and wow. You get scenes of training, rocket launches, failures and death along with the greatest accomplishment NASA has ever made. The launch of Apollo 11 is just breathtaking. The space visuals are some of the best we’ve seen since 2001: A Space Odyssey. I honestly loved the NASA stuff and found a lot of it to be jaw dropping and spectacular. I wish the movie was nothing but these scenes. The film looks pristine in 4K and sounds even better. The action sequences will have your room rattling and it’s one of those movies that is worth the 4K price. It also comes with deleted scenes, commentary and more. The film disappointed at the box office, I’m sure the US flag not on the moon controversy didn’t help, but I can see people checking it out on home video. I liked it overall, I just wish it was more the space stuff and less the home stuff.

Speaking of films that disappointed at the box office, there is a new two disc Limited Edition Blu-ray of Kevin Costner’s Waterworld out this week. This 1995 movie was the first film I remember being a box office bomb. There were plenty of movies that lost money, but this became THE movie people referenced when talking about bombs when I was growing up. Is it a great movie? No, but we here at The Nerds Templar have a soft spot for it. I’ve always thought it was entertaining and got a bad rap. This new release has gone through a 4K scan restoration of the original negative and comes with three cuts of the movie. There is a feature-length making-of documentary including extensive cast and crew interviews and behind the scenes footage. This new release looks and sounds great and is THE version to own if you like the movie. With three versions of the movie, one with 40 more minutes and one a European cut with censored shots and dialogue it’s almost like seeing a new movie each time. Highly recommended for fans. 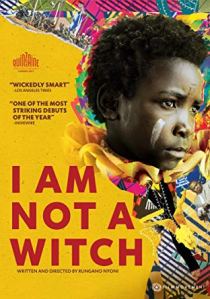 Third we have I Am Not a Witch which I hope is a dark comedy because that’s how it came across to me. It’s about witchcraft in Zambia and finds a 9-year-old girl accused of witchcraft who is sent to a camp full of witches. She’s the youngest in the group and the local politician uses her in different ways like trying to solve who stole money and other things. I definitely hope it was satirical and supposed to be a dark comedy because that’s how it came across to me. The local politician guy is a clown who can’t do anything right. The girl is tied to the ground with a white ribbon. The locals are your typical bumbling local types. Overall I liked it, but it seems to be getting a ton of praise which I don’t quite get. It’s not a bad movie or anything, but it’s been nominated for a 2018 Independent Spirit Award for Best International Film and is the U.K.’s Official Submission of Best Foreign Film for this year’s Academy Awards which I find baffling. It’s good for a watch and the young girl is quite good, but award worthy film? I don’t think so. 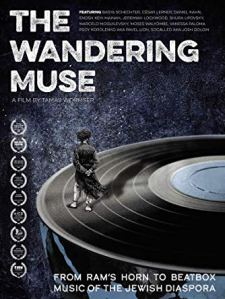 Last we have The Wandering Muse, a documentary on Jewish music and musicians. Over 7 years and different parts of the world, the film shows the different types of music that Jewish musicians take part in and what it means to them. There are rappers and folk type singers to traditional Hebrew prayer chants in Africa. I don’t know if any of it is music I’d go out of my way to listen to but I can respect what they do. Some of them did annoy me because they thought they were way bigger or more important than what they are. One guy calls himself a Socialist and does “important” music and he bothered me more than entertained me, but that’s just me. They all have a story whether they grew up in New York, grew up in a traditional household or found their Hebrew voice through music. It’s not a bad watch, but again, not any music I’d listen to.