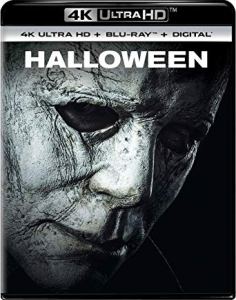 Things are finally starting to pick up in terms of releases in 2019 and I’ll start with one of the biggest hits of 2018, Halloween. Is it a remake like the Rob Zombie films? No. Is it a reboot? Sort of. It’s more of a sequel but it reboots the franchise and ignores all the previous sequels. It’s pretty much a sequel to the first Halloween from 1978 scrapping all the stories and arcs from that film’s sequels. Jamie Lee Curtis is back as Laurie Strode and this film takes place 40 years later with Michael Myers on the loose after a transportation bus accident. I first saw it at the theater and had a terrible experience. The crowd was absolutely awful as were employees working the screening. I wasn’t sure if I didn’t like the movie because of the experience or if the movie not being so good made the experience that much worse. Rewatching it at home, I definitely enjoyed it more, but still don’t quite love it. Some of the issues I have are standard movie tropes. Laurie’s granddaughter plays a major role and she’s not bad, but the other teen characters in it are almost unwatchable. They are nothing but cliched, typical teen characters who ultimately really don’t serve a point. There is a young child who is being babysat that got huge laughs at the theater that I rolled my eyes at. Dr. Loomis is long dead, but Michael has a new doctor who pretty much plays Dr. Loomis. There are two “investigators” in the beginning that ultimately mean nothing by the end as well. But the film does have some decent action and throwbacks to the original film. One scene, which I won’t spoil, reverses the gender and is a nice homage to that same scene in the 1978 film. Overall I liked the movie better the second time, but the original is such a classic. It looks great on 4K and sounds even better. It comes with deleted & extended scenes, a Making of, legacy and more. I didn’t love it, but it’s nice seeing the story play out the way it did. 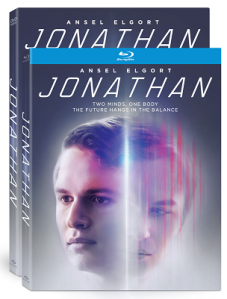 Second is the sci-fi flick Jonathan. Ansel Elgort plays two brothers living very separate lives – inside the same body. One brother is in control of the body while the other sleeps. They have different jobs, different lifestyles. They keep a video record of what they do, what they eat, how they spent their time. I don’t know if the situation is something that happens in real life because it’s not a schizophrenia type situation or multiple personalities. It’s probably closer to multiple personalities but they are well aware of each other and genuinely act like brothers. Jonathan, the more reserved brother, starts investigating the other brother John and realizes he’s not telling the entire truth. There is a woman involved and Jonathan starts doing things he usually doesn’t. The more dominant John seems to be spiraling and Jonathan seeks help to control it. It’s not a great movie but it’s pretty interesting. Elgort is really good as both versions and a different actor might not have been as watchable. It’s good for one watch at least although I could see myself maybe watching it again later on. 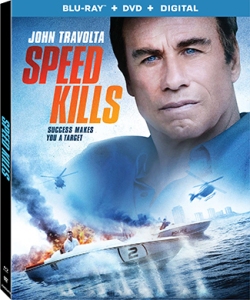 Next we have Speed Kills starring John Travolta. Travolta plays Ben Aronoff, a speed boat champion, boat salesman, former developer millionaire. It’s based on a true story and it’s pretty generic. Aronoff gets involved with some bad people. The feds get involved because his boats are being used to smuggle drugs. Kellen Lutz wants the boat company to do more bad things. It’s a mess and feels like every other movie where a guy gets involved with mobsters and rises to power just to be taken down. Travolta is fine I guess, but it’s just a generic film overall. Even Vikings’ Katheryn Winnick can’t save it. If you’ve never heard of it, there’s a good reason for that, it shouldn’t have been made. 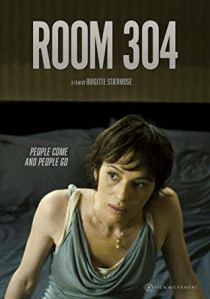 Next is Room 304. A Copenhagen hotel sees maids finding a gun, employees having an affair, a staff member sees her husband from another country show up and everything in between. The story is told through a nonlinear timeline with storylines overlapping. It reminded me of Bad Times at the El Royale a bit with the way stories connect. The cast is pretty good and I liked the style and direction. I don’t now if I’m familiar with anyone involved but everyone seemed believable. I can see Hollywood remaking it for an American audience because it does have style and different kinds of characters. Not a bad little surprise. 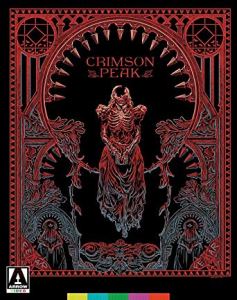 Crimson Peak has a new limited edition Blu-ray release this week. I first saw it in theaters and it was a big let down for me. Tom Hiddleston, Jessica Chastain, Mia Wasikowska and Charlie Hunnam star and Guillermo del Toro directed it but I remember being majorly disappointed in it. It just wasn’t the movie I expected. So I decided to give it another shot and it’s not as bad as I remember, but I still can’t say I’m a fan. The trailers made it seem like a horror film or at least scary. You think the house will be a character in itself and it’s not. In fact it takes a while to even get to the house and then it serves no purpose. Most of what happens serves no purpose. They focus on this red clay that makes snow crimson and you think the clay will come into play. Maybe it’s magic clay and keeps them immortal or something cool. Nope. It does nothing. There’s no point to it. There’s no point to the machine Hiddleston wants to make to remove the clay. He needs money for the machine and parts for the machine and does the machine mean anything to the story? Nope. It does nothing. There’s really no point to them moving to England. Yes Hiddleston and Chastain’s characters live there, but, without spoiling “the twist”, they could have stayed in the US to accomplish their goal. The twist itself is lackluster. I was expecting vampires or immortality or something supernatural. Nope. I won’t spoil it, but I rolled my eyes when it came about. The only thing supernatural is Wasikowska being able to see ghosts, but even that isn’t quite necessary. She could have figured out the twist just by snooping around. But the movie does have fans and this new release comes with a ton of bonus features. There is The House is Alive: Constructing Crimson Peak, a newly edited, feature-length documentary with cast and crew interviews and extensive behind the scenes footage, audio commentary by co-writer and director Guillermo Del Toro, previously unseen Spanish language interview with Guillermo Del Toro, Violence and Beauty in Guillermo Del Toro’s Gothic Fairy Tale Films, a new video essay by the writer Kat Ellinger, deleted scenes and much, much more. 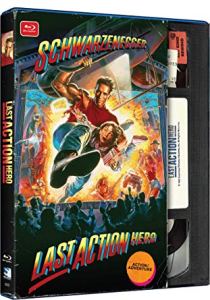 Also out this week is a new collection from Mill Creek Entertainment called Retro VHS Blu-ray. These are Blu-ray releases with VHS styled slipcovers. They are pretty sweet. First is Last Action Hero starring Arnold Schwarzenegger. It was one of Arnold’s first real slip ups at the box office, but the film has grown to have a cult following. It’s better than I remembered and it finds a young boy being transported into a movie where Schwarzenegger plays the toughest cop on the police force. The bad guy is transported into the real world and I guess those timeline jumps went over people’s heads back then. I never hated the movie nor loved it, but it’s grown on me for sure and I can say I like it now. It’s been on Blu-ray for a while, but look at that sweet new slipcover! 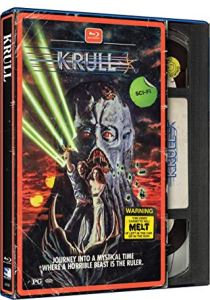 Krull, like Last Action Hero, is a movie that has grown in cult status. You know they thought they were making some big epic film ala Star Wars back then, but watching it now, you can see why it wasn’t big. It’s a fun, campy watch today, but other films of that time period are way better. Clash of the Titans came out 2 years before this and is a better film. I’d kinda put this on the level of The Last Starfighter, films that tried really hard, weren’t bad, but never quite got to where they wanted. The special effects by today’s standards are pretty “special” if you know what I’m saying and the mix of genres seemed odd. You have guys on horses and using swords that can shoot lasers at times fighting wannabe Stormtroopers so it’s a mix of medieval and science fiction. But I still have a lot of fun with it and again look at rad slipcover! 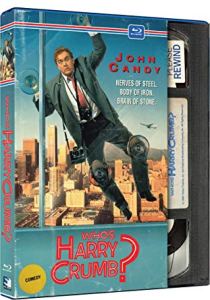 Who’s Harry Crumb? is a John Candy comedy I haven’t seen in decades and boy has it not aged well. I remember liking it as a kid but it’s not really funny anymore. Candy does a ton of physical humor but a lot of it doesn’t work for me and people would definitely be offended at it in today’s political climate. I do miss the time when an overweight guy could be a leading man but this was more a trip down memory land than something I enjoyed seeing again. But, killer slipcover! 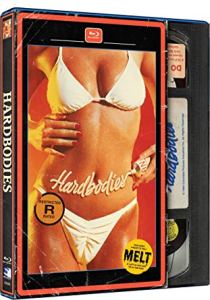 Next we have Hardbodies. This is very 80s. Three middle-aged men try to get help from a young stud to help them score with the ladies. They change clothes and their style. They try being hip. They try hosting a party. They just want to get with the ladies. That’s all I got out of it. Not very good, but cool slipcover! 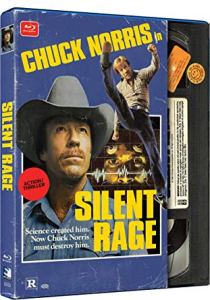 Second to last is Silent Rage starring Chuck Norris. I had never seen it and it’s classic Norris action mixed with a Re-Animator type storyline. Sure Chuck fights a motorcycle gang, but there is also scientists working on a formula to bring back someone from the dead. A patient gets loose and kills some people and the doctors give him this formula which makes him superhuman and almost unstoppable. Norris fights everyone and even gets a love interest. Definitely not what I was expecting but pretty fun if you like Chuck Norris. Plus look at that hat and kick on the slipcover!

Last we have Happy Birthday To Me another film I hadn’t seen before. This 1980’s horror film is about a girl whose friends end up getting killed at a fancy school. Her mother died in a car accident, but she survived exiting the car when it was in the water. She has issues and flashbacks and the movie really wants you to lean one way until the end. The end twist comes out of nowhere and I don’t think it works. Reading about the film it looks like it wasn’t the ending they had in mind and it seems out of place. It’s a decent horror flick that I’m sure some people have fond memories of. It’s something I can see myself watching again and I can definitely see Hollywood remaking it. Plus look at that slipcover, a guy is being kabob’d to death!