Controversial, compelling and critically acclaimed, The Shield takes place in a tough, morally ambiguous world in which the line between right and wrong is crossed every day and the road to justice is twisted. Emmy® and Golden Globe®-winner Michael Chiklis portrays one of television’s greatest anti-hero, Detective Vic Mackey, who runs his elite Strike Team under his own set of rules as he tries to maintain balance in the criminal ecosystem on the streets of Los Angeles. 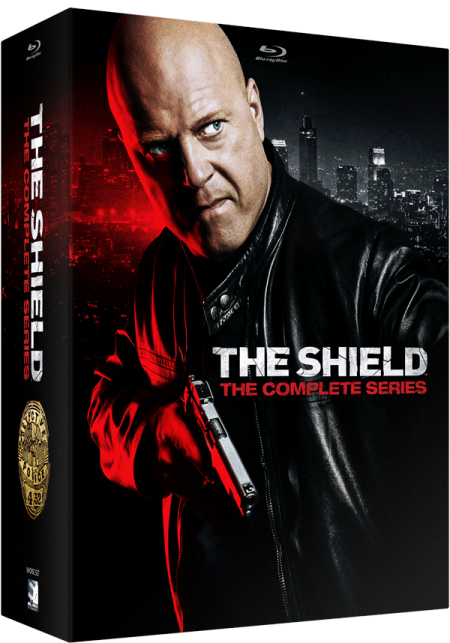 The Shield is one of my all-time favorite TV shows, easily in my top 10 if not top 5. So because of that, this review will be a bit different because you’ll get tired of me saying I loved it over and over again. I did love the show and it helped launch careers for those in front and behind the camera. Instead I’ll talk about the show’s legacy and what you get in this new release.

At this point we take 1-hour procedurals for granted. Breaking Bad, Mad Men, The Walking Dead, Game of Thrones, we watch(ed) the hell out of those. In the 1980’s and 1990’s there were shows like St. Elsewhere, LA Law, NYPD Blue, but overall they were what we expected them to be. Sure NYPD Blue pushed the envelope more than other shows, but it looked like a TV cop show, felt like a TV cop show. The Shield came in and changed all of that. It didn’t look like a TV cop show. It hit the ground running, literally, characters ran through the streets and cameras followed them. It was gritty and realistic. The leads of the show were cops, but weren’t necessarily good guys. Bryan Cranston’s Walter White on Breaking Bad may have become the definition of ant-hero but Michael Chiklis’ Vic Mackey created the ground rules.

Not only is the pilot episode one of the best pilots in TV history, it’s one of the best episodes of TV period. It contains one of the biggest “Holy shitballs!” moments ever and showed the audience that the show was going to be something new and exciting. Our heroes did the unthinkable and that would haunt them throughout the series. The balls the show had changed TV dramas and helped make FX a network on the come up. Without The Shield would FX have been able to air Always Sunny, Nip/Tuck, American Horror Story and all the other shows since? It brought credibility and awards to the new network.

It also changed how we see Michael Chiklis. He was no longer The Commish. He was no longer pudgy. He was bald and badass. It gave us Walton Goggins who I truly believe is the best TV actor of the past 20 years. With season long stories involving Glenn Close and Forest Whitaker, it showed that “Movie” actors could do TV and be respected. The show’s frontrunner Shawn Ryan would go on to do more TV shows. Sons of Anarchy creator Kurt Sutter was a writer on the show. As was Glen Mazzara of The Walking Dead. The list goes on and on.

Clearly I liked the show so now let’s talk about this release. The day I got it I popped in the bonus features. I immediately watched the show reunion with Shawn Ryan, Michael Chiklis, Catherine Dent, Walton Goggins, Jay Karnes, Benito Martinez, CCH Pounder, Cathy Cahlin Ryan, Kenny Johnson, David Rees Snell, Paula Garcés, and David Marciano. The hour long get together is a great retrospective on what the show meant to the actors and how it changed TV. It is fun, funny, and heart warming. Years later the cast still genuinely loves each other. I was also surprised that Ryan brought up cast member Michael Jace who is in prison for killing his wife. Jace was a major character for the entirety of the show but I was surprised he was mentioned. I also watched the writers’ room feature from a convention with Ryan, Sutter, Mazzara and others talking about what it was like writing for the show. Really interesting stuff.

This new The Shield: Complete Series box set from Mill Creek Entertainment is a must own. The series has been restored with a new patented process. The entire series has undergone a 4k transfer and restoration from the 16 mm film elements preserving the intentional grit and raw texture that’s unique to this series. So between the restoration and bonus features, it’s like watching the show for the first time. It is a show I will rewatch time and again and a show that will go down in TV history. This new set is… 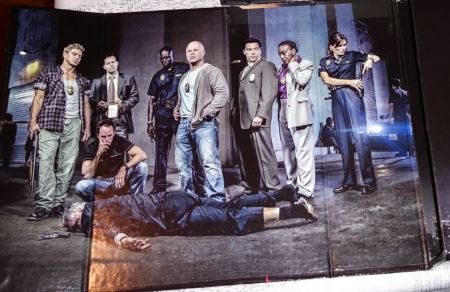