Recently released from prison, Jimmy (Reynor) hopes to reconnect with his younger adopted brother, Eli (Truitt), and estranged father (Quaid). But after a run-in with a vengeful criminal (Franco), Jimmy and Eli become fugitives with one hope for survival: a metallic box from another dimension that transforms into a superpowered weapon and leads Eli to discover his true identity—a hero destined for greatness—in this thrilling action-adventure with a sci-fi twist. 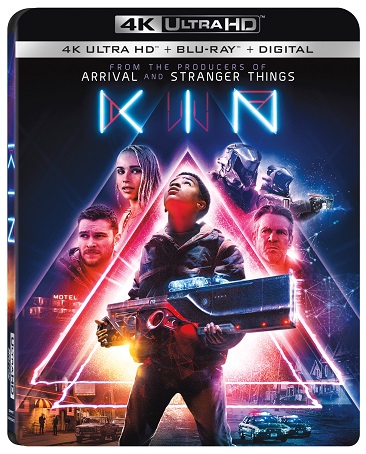 Kin has its flaws, but I liked the film and like seeing the fact that we are going back to making movies/TV shows showing kids being kids. The trailer makes the movie seem like it’s a non-stop sci-fi romp, but it’s more of a family drama with science fiction elements.

Newcomer Myles Truitt plays the adopted son of Dennis Quaid. His adopted mother has passed and he gets into a fight at school. He lives in Detroit and enters abandoned buildings to steal copper and other materials he can scrap for money. In one building he finds a bunch of dead bodies, but not quite normal looking bodies and a special weapon. His brother (the underrated) Jack Reynor is released from prison after six years and owes some bad people some money. Those people are led by James Franco and after an incident gone wrong, Truitt and Reynor hit the road under the guise of a mini-vacation which Reynor is lying about. The brothers bond spending time together while Reynor tries to keep them safe.

Because the film is more of a drama it is slow at times. Reynor and Truitt’s characters meet Zoe Kravitz on their way. You get a bit of her backstory. Franco and his men are out trying to find them. There are two people looking for them to get their weapon back. The authorities are out looking for them as well. There is so much going on that the film forgets about its sci-fi storyline until the kid needs to use the weapon. There’s a big twist towards the end, but I won’t hint at that or who makes a surprise cameo. I like the bond between Reynor and Truitt so I don’t know what I would have changed to make it more fluid without simply adding more sci-fi for the sake of sci-fi.

But the sci-fi elements in the film are great. When Truitt’s character first gets the weapon, he does what any kid would do, sneak it home and try to figure it out. The first time he uses it is a great scene and then Reynor convinces him to try out all the features in the field. The pop up scope on it is cool as is the tech the two other worldly people use. They can scan rooms, hijack motorcycles and travel through dimensions. The visuals are really good and because of that, I do wish the film had more of them.

It being a drama, the scenes with Reynor and Truitt are great. I loved Reynor as the older brother in Sing Street and he’s just as good as the older brother in this. I have an older brother, I can relate to this scenario. It felt like a genuine bond they were forming with both wanting to protect the other. They never let Truitt act older than what he is and even in situations like a strip club or a showdown with bad guys, you always feel like he’s a teen who doesn’t feel like he belongs there.

Unfortunately Kin came and went at the box office. I don’t think they marketed it right or maybe they didn’t know what to do with it. I honestly think it should have gone to Netflix and been pushed with the tag of “From the producers of Stranger Things”. It’s not quite the movie I expected. I was expecting something like Upgrade Jr., but I did like it overall despite it being slow at times. Hopefully people will check it out now that it’s on home video.

Based on the short film ‘Bag Man’ by: Jonathan & Josh Baker