The horror flick centers around Kit (Lindsey Morgan) and Simon (Andrew Jacobs), two young leaders of an Active Senior Tour group, out on an adventure to a small-town Rodeo festival located deep in the woods. It’s a great experience for the group … until they try to leave. Simon and Kit must save themselves, and whatever seniors they can, from becoming victims of a deadly Rodeo Ritual. Along the way they join up with another unexpected group of victims, including a one-armed cowboy, Ennis (Sean Patrick Flanery), Rosheen, the Rodeo queen, and Trish, a powerhouse female bull rider. Together the group must fight to survive the night from relentless bloodthirsty cowboys on the hunt for human livestock. 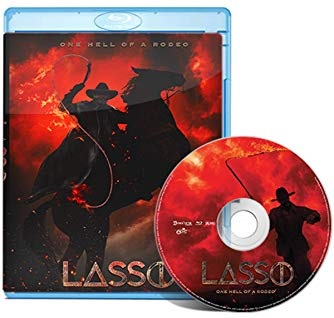 Lasso has some great kills which raises the enjoyment level of the film. It wasn’t exactly the film I expected but it’s good for at least one watch especially for the gore factor.

Sean Patrick Flanery is probably the biggest name in the cast and he plays a cowboy with one arm. There is a really funny scene with him and the bad guys, but I won’t spoil it because I did genuinely laugh out loud at it. That’s the best part of the film, you laugh at it and with it at times. Some of the acting is suspect, but the deaths and action are great and funny. If you’ve ever wanted to see a head caved in with a workout plate, this is the movie for you.

I think I expected more cowboying and what not out of the film. With a name like Lasso, I expected a lasso to be the main killing instrument, but it’s not. In fact I only remember two or three scenes with it. There might be more, but only two seem to be memorable. Other deaths feature branding and what not, but I thought a lasso would be the way everyone dies.

Other than the gore/kills it’s also smart in that it doesn’t try to be anything it’s not. There is no crazy message and it doesn’t beat you over the head with anything. In fact, other than the bad guys shooting up horse steroids, I don’t even know if it explains why they are bad guys. Did I miss some occult explanation or something? I don’t think I did.

A lot of the characters are cliched in Lasso but the action/death scenes are worth it. I expected more of an occult/supernatural flick, but it’s a modern tale with modern type characters. Flanery’s one-armed cowboy is good and the violence is pretty top-notch for a film like this. Overall it’s worth checking out.