Academy Award® nominee Benedict Cumberbatch lends his voice to the infamous Grinch, who lives a solitary life inside a cave on Mt. Crumpet with only his loyal dog, Max, for company. With a cave rigged with inventions and contraptions for his day-to-day needs, the Grinch only sees his neighbors in Who-ville when he runs out of food.

Each year at Christmas they disrupt his tranquil solitude with their increasingly bigger, brighter and louder celebrations. When the Whos declare they are going to make Christmas three times bigger this year, the Grinch realizes there is only one way for him to gain some peace and quiet: he must steal Christmas. To do so, he decides he will pose as Santa Claus on Christmas Eve, even going so far as to trap a lackadaisical misfit reindeer to pull his sleigh.

Meanwhile, down in Who-ville, Cindy-Lou Who—a young girl overflowing with holiday cheer—plots with her gang of friends to trap Santa Claus as he makes his Christmas Eve rounds so that she can ask him for help for her overworked single mother. As Christmas approaches, however, her good-natured scheme threatens to collide with the Grinch’s more nefarious one. Will Cindy-Lou achieve her goal of finally meeting Santa Claus? Will the Grinch succeed in silencing the Whos’ holiday cheer once and for all? 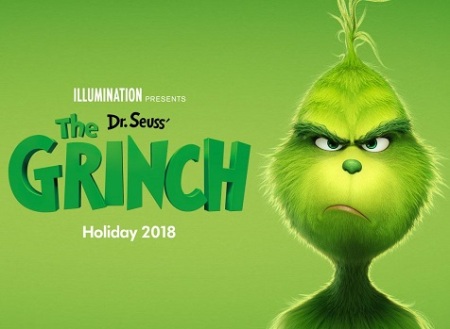 I enjoy Illumination Studios and the movies they put out. I had a lot of fun with the Despicable Me franchise, Sing, The Secret Life of Pets and more. I wasn’t sure what to expect from Dr. Seuss’ The Grinch. The Christmas TV special, How the Grinch Stole Christmas!, has run for decades and is a classic in my book. But that’s under 30 minutes long so I had concerns about how they would fill in the story to make a feature-length film.

The kids at the screening seemed to love it. They laughed at Max the Dog and Fred the Reindeer. They enjoyed the music and adventure and that’s awesome. It’s a very colorful film with all kinds of crazy looking characters it being Dr. Seuss of course. The music is fun and the animals are fun. Your kids will love it.

Along with The Grinch’s plan to steal Christmas they add in a side story with Cindy-Lou Who who wants to meet Santa because her mom is always busy and doing everything for the kids so she wants her mom to be happy.  Cindy-Lou Who has friends and they help her try to meet Santa and they are all fun for the kids. By adding this storyline they extended the movie’s length. It also brings in more kid friendly characters especially her best friend character.

Overall I liked Dr. Seuss’ The Grinch but it’s not one I can see myself watching multiple times. If you have a family, especially young kids, go see it. They will have a blast. Benedict Cumberbatch makes for a good Grinch. Max the Dog is a lot of fun like in the TV version. Kenan Thompson’s character might be the best character in the movie and his house is so ridiculously Christmas-y. I like their other films better, but for families and kids this holiday season, this film is…

Based on the Book “How the Grinch Stole Christmas” by: Dr. Seuss