Pretty decent week for releases including one of the biggest movies of 2018, Disney/Pixar’s Incredibles 2. For years fans wanted a sequel and overall Disney/Pixar delivered. It was an absolute juggernaut at the box office doing over $600 million in the US and over $1.2 billion worldwide. As for the film itself, I liked it, it made me laugh at times and has some great action sequences. It has some problems of course but I say that about most Pixar films. The film skews older for sure. There are some darker scenes and the plot of the movie is how attached we are to devices so that’s going to go over younger heads. Adults will understand being slaves to a screen, but do 7 year olds want that in a movie? I also wish it had more scenes of the family fighting together. The best part of the first film is when they finally came together as a unit and took on the bad guy. This one opens with them fighting together, but then it becomes about Elastigirl and the family dynamic is pushed to the back. I did like the scenes with Mr. Incredible, Frozone and the kids trying to figure out Jack-Jack’s powers. Edna is always good. And the end fight sequence is pretty fantastic as well. I just wish it was more like that than the slower middle. It’s absolutely beautiful to look at on Blu-ray just like it was on the big screen. Disney’s Blu-ray releases are always flawless and this looks and sounds flawless. Bonus features are very good with the short film Bao and an all-new mini-movie called Aunt Edna, 10 deleted scenes, featurettes and much, much more. If you were a kid and liked the first film and you’re an adult now, you’ll like it. If you are a Pixar fan, you’ll love it. This will sell a lot of copies especially with the holidays coming up. Recommended!

Sticking with Disney, next is Disney’s Christopher Robin starring Ewan McGregor, Hayley Atwell and the voices of Jim Cummings, Brad Garrett, Toby Jones, Nick Mohammed, Peter Capaldi, and Sophie Okonedo. I first saw the movie at the theater and was kind of confused by it. I was comparing it to last year’s Goodbye Christopher Robin and it just wasn’t making sense to me. That film tells the story of how Winnie the Pooh was created by A.A. Milne and involves his son Christopher Robin and his toys. That was based on a true story and this one didn’t make sense at first because of it. This story didn’t match that story and then someone explained to me that this story is about the FICTIONAL Christopher Robin not Milne’s actual son. Once that made sense I really enjoyed the film. Watching it now a second time understanding what was happening I enjoyed it a lot more as well. It’s a delightful look at an adult version of Christopher Robin who is a husband and father and has long forgotten about Pooh and his friends at The Hundred Acre Wood. McGregor is always good as is Atwell and the voice actors are fantastic as well. Brad Garrett steals the movie as Eeyore. Jim Cummings has been the voice of Disney’s Pooh since the late 1980’s and he’s magnificent. Once the film gets into the interaction with Pooh and Christopher Robin it becomes incredibly charming and families will love their adventures. That is when the movie is at its best. All the characters we grew up with come to life and have an adventure in London. All the characters have a good look in live action and Pooh himself looks very huggable. Whoever designed the characters did a great job because they look vintage yet also cute and very playable. The movie looks and sounds great on Blu-ray and the bonus features show how the stuffed animals come to life for the movie. Bonus features also explore Walt Disney’s love for Pooh as well. This film is also recommended! 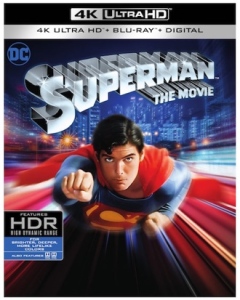 Third we have the 4K release of Superman The Movie. It’s been 40 years since Christopher Reeve first put on the tights and in that time this Richard Donner film has become the granddaddy of superhero films. Others have played Clark Kent/Superman, but without Reeve’s performance, superhero films/TV shows just wouldn’t be the same. This release also coincides with the 80th anniversary of the creation of Superman. The movie itself would go on to get multiple Oscar nominations and set the groundwork for future films. Superman had been played before on TV and radio, but without this landmark film, Batman, The X-Men, The Avengers and all the films we love nowadays wouldn’t exist. Gene Hackman was a great Lex Luthor. Margot Kidder was the best Lois Lane and had unbelievable chemistry with Reeve’s Clark Kent/Superman. Heck even Marlon Brando was in this. Long before CGI dominated our big screens, Reeve flew through the Metropolis sky with practical effects. The 4K looks pretty sweet especially for a 40-year-old film. It’s hands down the nicest it’s looked on home video and comes with commentary, making of special, trailers and more. An absolute classic film and Reeve to me will always be the best Superman. 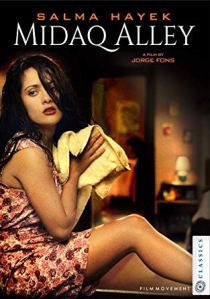 Next we have Midaq Alley hitting Blu-ray for the first time. This mid 1990’s Mexican film helped make Salma Hayek a star and features overlapping storylines with different perspectives. It involves gay lovers, a bar, a barber, a woman looking for love (Hayek), a man trying to get to America, a family man who gives into gay desires, a prostitution ring and so much more. I had never seen the film before and thought it was good, but others think it’s great. It’s won more Mexican movie awards than other film. You could tell Hayek had that “it” factor and she dominates most of the scenes she’s in as the naive Alma who ends up way over her head. I liked the direction and style of the film with the different perspectives telling one whole narrative. It’s a good movie, but award-winning is surprising to me. But if you are a fan, this new release is for you and features behind the scene footage and more.

Girls vs. Gangsters is the latest female lead comedy. This Asian film sees a group of female friends in a wild Bachelorette party and not knowing what happened or where their friend is. It’s a sequel to Girls (which I never saw/heard of) and is also a rip off of The Hangover, Girls Trip and all those films. All three leads are attractive and funny, but there’s nothing original about the movie. Mike Tyson makes an appearance and he’s kind of funny actually. The girls need to spend gold and escape gangsters and all that nonsense. It’s not bad for a one time viewing, but if you’ve seen any of the movies I’ve mentioned, you’ve seen this. 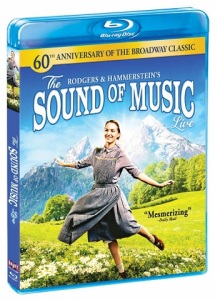 Shout Factory has out a Blu-ray of Rodgers & Hammerstein’s The Sound of Music Live. This is a live-broadcast production from BAFTA-nominated director Coky Giedroyc shot with 17 cameras on 3 soundstages. I”m not a huge fan of musicals but I respect the heck out of the talent and production. I know I’ve seen some version of The Sound of Music before but I can’t tell you if this is any different than other productions. Kara Tointon stars as Maria the nun and is pretty amazing in the role. The music is good. The costuming and production are great. Musicals just aren’t my thing, but I can see fans loving this.

Third to last is La Boyita also referred to as The Last Summer of La Boyita. This film is from 2009 and is a coming of age story from Argentina. A young girl goes with her father to their farm to ride horses and get away from her older sister. She meets a boy who rides horses but doesn’t like taking his clothes off and is hiding a secret. She befriends him and wants to help him but doesn’t really understand what’s wrong with him. Her father is a doctor and tells him the truth of what’s going on with his body. I won’t spoil it for those who haven’t seen it. The movie is fine I’m just not a huge fan of coming of age stories. The actress is good, but there are some uncomfortable scenes with a girl that young. I wasn’t familiar with the film, but it seems to have won a lot of awards in its native land. 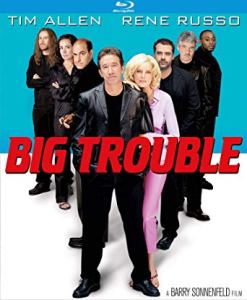 Next we have Big Trouble. This early 2000’s flick was a flop at the box office despite a pretty well known cast. The issue wasn’t the movie or cast, it was timing. It was originally coming out in 2001 but after 9/11 it was shelved because of a terrorist plotline in it involving a plane. This action comedy is filled with names like Tim Allen, Rene Russo,  Dennis Farina, Stanley Tucci, Zooey Deschanel, Tom Sizemore, Johnny Knoxville, Ben Foster, Janeane Garofalo, Patrick Warburton, Omar Epps, Jason Lee, Andy Richter, DJ Qualls, Sofia Vergara, and Heavy D. Some of those names weren’t even big names back then and I didn’t realize Ben Foster was in it till watching it now. It’s an updated It’s a Mad Mad Mad Mad World just not as good. It deserved a better showing at the box office in 2002, but I’m happy to see it’s grown a bit of a cult following nowadays. This Blu-ray release features NEW Audio Commentary by Director Barry Sonnenfeld and trailers. It’s not a classic comedy but it’s better than you think.

Last we have The Good Fight: Season Two. I never watch the spinoff of The Good Wife until it hits DVD. I’m just not a big fan but I know people who enjoy it. This release sees all 13 episodes of season 2. Law dramas are either must see TV or just marginal. I only find this show marginal. The acting is good and the writing is good, but I’m just not entertained by it. It took me a couple of days to binge this season because it’s hard to sit down and burn through it. But if you like the show Season 2 is now out on DVD.