One of Marvel’s greatest and most complex characters takes center stage as Eddie Brock (Tom Hardy) becomes the host for the alien symbiote Venom. As a journalist, Eddie has been trying to take down the notorious founder of the Life Foundation, genius Carlton Drake (Riz Ahmed) – and that obsession ruined his career and his relationship with his girlfriend, Anne Weying (Michelle Williams). Upon investigating one of Drake’s experiments, the alien Venom merges with Eddie’s body, and he suddenly has incredible new superpowers, as well as the chance to do just about whatever he wants. Twisted, dark, unpredictable, and fueled by rage, Venom leaves Eddie wrestling to control dangerous abilities that he also finds empowering and intoxicating. As Eddie and Venom need each other to get what they’re looking for, they become more and more intertwined — where does Eddie end and Venom begin? 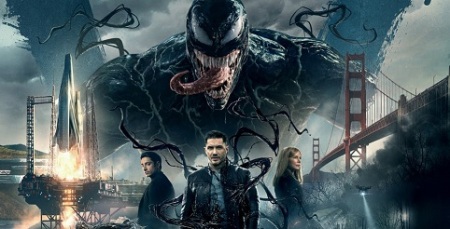 I had heard some really bad talk surrounding early reviews of Venom. The fact that it was screening only days before it was coming out and that there wasn’t much buzz around it didn’t help either. Add in that it’s been recut multiple times and was coming in with a PG13 rating and not the R rating it deserved and well, my hopes for it being good were super low.

So how is it? It’s watchable. It’s not great, I’m not sure it’s even good, but I heard someone call it Catwoman bad and that guy is clearly a clown. I’ll go over some negatives first. Tom Hardy shouldn’t be Eddie Brock. He’s not tall enough and doesn’t have the right hair color, but people accepted him as Bane in The Dark Knight Rises and Bane is even bigger than Eddie so go figure. That being said, he’s fine in the movie if you ignore the source material. You can actually understand what Hardy’s saying unlike other movies and with Venom being more an anti-hero than superhero, Hardy’s persona does fit that. He plays the human Eddie Brock and does the voice of Venom, but the Venom character itself is CGI. If you know the character from the comics, it’s understandable why he’s CG. I just hate overly done CG. Venom fights another symbiote and it looks like another Transformers Michael Bay fight, all cluttered and you can’t tell who is who.

Riz Ahmed is a good rich bad guy, but the character is pretty flat. He’s believable as an Elon Musk type that made his fortune and now wants to head to space. He has spacecrafts that bring the symbiotes to Earth and he wants to help heal people, but also has ulterior motives. So basically his Carlton Drake is just another standard villain in a comic book movie. In a year that gave us fleshed out bad guys like Thanos and Killmonger, we end it with a generic rich guy with his own agenda. Ahmed is good, the character is pretty stereotypical.

The biggest positive with the film is the runtime. It is a lot shorter than I was told with the story ending around 90 minutes (it being a comic book movie you have to sit through credits which run about ten minutes after the narrative end). Early reports had the film coming in close to 140 minutes. Then rumors said the final cut was just under two hours. It ended a good half hour before I thought it would. A fast movie means it doesn’t wander too much and gets right into it pretty quickly. A friend and I joked before the movie you wouldn’t actually see Venom the first two hours, but Venom and Brock fuse in under an hour which shocked me. Even being short, the film does feel super choppy.

That’s a big negative, you can tell the studio didn’t know what to do with it and it feels like multiple cuts had been made. Venom to me should have been Rated R like Deadpool and Logan, he’s a similar dark character that also happens to eat heads. With Spider-Man being in the MCU, Sony wanted a franchise with Venom and you’ll only get a major franchise (3 plus films) with a kid friendly PG13. I understand the business angle to it, but the character deserved the R Rating for violence and more. Beyond the short runtime, you can tell it was chopped up and spliced together to get it a PG13 Rating and it struggles because of it.

Venom isn’t the abomination I thought it would be. It’s not great, but it’s way better than Fantastic Four, X-Men: Apocalypse and anything DC has put out the past 10 years (yes that includes the overrated film from last year). It’s not the Venom movie fans deserve, but for a movie with no buzz and one that has been cut up and sliced, it’s at least watchable.