Directed by Academy Award® nominated producer Marc Turtletaub (Best Picture, Little Miss Sunshine 2007), PUZZLE is the moving and heartfelt story of a middle-aged wife and mother who finds she has a talent for jigsaw puzzles. This skill leads her on a journey of self-discovery that will change her life forever. Starring Kelly Macdonald (Goodbye Christopher Robin, TV’s “Boardwalk Empire”), Irrfan Khan (Jurassic World, The Lunchbox), David Denman (Logan Lucky, 13 Hours), Bubba Weiler (The Ranger), Austin Abrams (Brad’s Status, We Don’t Belong Here) and Liv Hewson (“The Santa Clarita Diet,” Before I Fall), the pieces come together when PUZZLE arrives on DVD and digital on November 13 from Sony Pictures Home Entertainment. 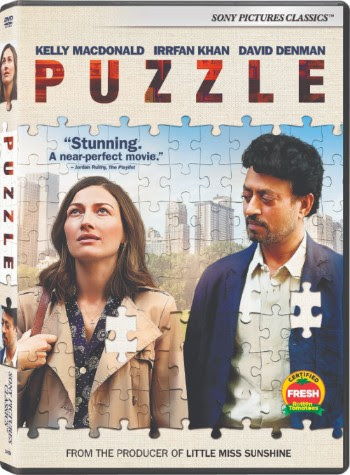 Certified Fresh® on Rotten Tomatoes, critics have embraced this female empowerment story and praised Kelly Macdonald’s performance as her one of her career best.

The DVD release of PUZZLE includes the featurette “Completing the Puzzle,” in which viewers will step behind the scenes with Kelly Macdonald, director Marc Turtletaub and the cast for an exploration of this complex, moving and engaging story; an insightful commentary with director Marc Turtletaub as he reflects on the extraordinary cast and how his vision for the film was realized; as well as an alternate ending.

Synopsis:
After years of concerning herself exclusively with the needs and wants of her husband and sons, Agnes has found something that she wants to do: puzzling. Stepping out of her domestic bubble to pursue her new hobby, Agnes meets Robert, a wealthy, reclusive inventor who recruits her as his partner for an upcoming world jigsaw tournament. Each day she spends out in the world, takes Agnes further along on the road to a new understanding of herself and an assertiveness that finds her pushing back against the assumptions and routines that have until now defined her role in her family.

PUZZLE has a run time of approximately 102 minutes and is rated R for language.