No two road trips are the same and in BOUNDARIES, directed and written by Shana Feste (Country Strong), Academy Award-nominee® Vera Farmiga (Best Supporting Actress, Up in the Air 2010), Lewis MacDougall (A Monster Calls) and Academy Award-winner Christopher Plummer (Best Supporting Actor, Beginners, 2012) take us on an adventure that includes lots of adorable stray cats and dogs, the beautiful California coastline and bags of marijuana concealed in adult diapers in the trunk of their car (unbeknownst to Vera’s character “Laura”). Together they bring to life Feste’s autobiographical portrait of her charming grifter of a father. 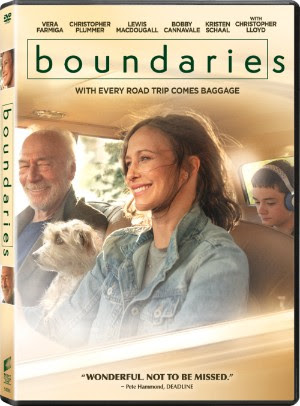 The DVD release of BOUNDARIES includes the featurette “Setting Boundaries: A Look Behind the Scenes” that focuses on director Shana Feste and her incredible cast as they discuss the making of this funny, touching and irreverent story.

Synopsis:
Laura (Vera Farmiga) is a single mother living in Seattle, who has a constant need to put others and animals before her. When her estranged, criminally-minded father Jack (Christopher Plummer) is kicked out of his retirement home, Laura agrees to drive him down the coast to live with her sister JoJo (Kristen Schaal) in Los Angeles. Along for the ride is her bright but troubled son Henry (Lewis MacDougall), and an assortment of animal charity cases. Without telling Laura, Jack convinces Henry to help him sell off his copious supply of marijuana at every stop of their journey, resulting in unexpected reunions with old friends and family.

BOUNDARIES was directed and written by Shana Feste, produced by Brian Kavanaugh-Jones and Chris Ferguson and executive produced by Bailey Conway-Anglewicz and Jennifer Besser.

BOUNDARIES has a run time of approximately 104 minutes and is rated R for language and drug use.