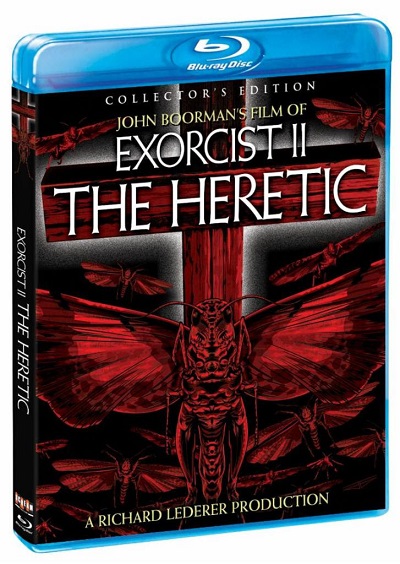 Following the enormous box-office success of its supernatural predecessor, EXORCIST II: THE HERETIC premiered in 1977 to deliver another dose of demonic possession to terrified audiences. And, on September 25, 2018, Scream Factory pays homage to this haunting sequel with the ultimate blu-ray collector’s edition. The 2-disc set, featuring new 2K scans of both theatrical editions from original film elements, is also loaded with specially-created features including an interview with Linda Blair, audio commentary from director John Boorman and much more.

In EXORCIST II: THE HERETIC, bizarre nightmares plague Regan MacNeil (Linda Blair) four years after her possession and exorcism. Has the demon returned? And if so, can the combined faith and knowledge of a Vatican investigator (Richard Burton) and a research specialist (Louise Fletcher) free her from its grasp?
Employing production design and special effects that are dizzily exhilarating and a supporting cast (Max von Sydow, Paul Henreid, James Earl Jones) of compelling distinction, director Boorman (Deliverance) draws us into the tangible experience of evil. We fly with the demon, feel the African landscape vibrate and get engulfed in the terror of swarming locusts as the Exorcist franchise continues to weave its fascinating, frightful spell.

Fans eager to receive the set prior to its release are invited to order the collector’s edition directly from shoutfactory.com; it will ship two weeks early and, while supplies last, the order will be accompanied by a free 18×24 rolled poster featuring Scream Factory’s chilling new artwork.