Lightyear Entertainment presents the Australian production Goldstone, a noir thriller set in the Outback. The film was written, directed, shot, edited and composed by Ivan Sen. 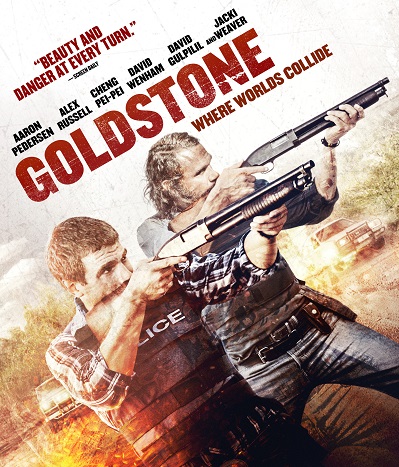 Indigenous Detective Jay Swan (Aaron Pedersen, Mystery Road) arrives in the frontier town of Goldstone on a missing persons inquiry. What seems like a simple investigation opens a web of crime, corruption, trampling of indigenous people’s land rights, and human trafficking. Jay must pull his life together and bury his differences with young local cop Josh (Alex Russell, SWAT), so together they can bring justice to Goldstone.

“The physical and emotional wallop of the best westerns.”

“Why isn’t Pedersen – a world-class brooder with soulful eyes and a singed masculinity – an international star?”
– Los Angeles Times

“Riven with racism and sharp bursts of violence, Goldstone nevertheless has a rough, desolate beauty. Gorgeous aerial shots reveal a blasted and burnished expanse, as if all of the town’s precious metal – unlike its crimes – lay nakedly, dazzlingly exposed.”
– New York Times

“It feels like a cousin of the socially conscious contemporary Westerns of writer-turned-director Taylor Sheridan, (Hell or High Water and Wind River). Sen spins this mesmerizing yarn unhurriedly, even up to the point where its many tangled threads – sex trafficking, cultural oppression and the all-too-common complicity of the oppressed – threaten to break apart in an explosion of violence.”
– Washington Post