Howard Silk (J.K. Simmons) is a lowly cog in the bureaucratic machinery of a Berlin-based United Nations spy agency. When Howard discovers that his organization safeguards the secret of a crossing into a parallel dimension, he is thrust into a shadow world of intrigue, danger, and double cross . . . where the only man he can trust is his near-identical counterpart from this parallel world. The show explores themes of identity, fate, and lost love, posing the eternal question, “what if our lives could have been different?” 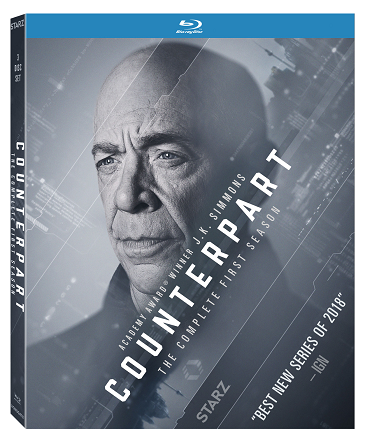 Counterpart feels like a spy thriller written by John le Carré mixed with the science fiction of Fringe. Fans of Fringe that have been dying for a new show have finally found one. As with that series, this sci-fi show is about two parallel worlds and the interaction between them.

I’ve been a fan of J. K. Simmons for years (long before Whiplash) and he’s great in this. He plays two versions of the same character, one a tough as nails field agent willing to do whatever it takes to get the job done. The other, a more meek, office man who isn’t even aware of the other world. In the 1990’s an event occurred splitting one world into two parallel worlds. Each person has a slightly different version of themselves on each side shaped by slightly different events and decisions. One world had a flu that wiped out a large portion of the population and some people think the other world caused it. Each world shares knowledge and intel, but some do feel like diplomacy shouldn’t be the answer.

The office version of Simmons sees his wife hit by a car and he visits her in the hospital every day while she’s in a coma. The field agent version is long divorced from his wife. The meek Howard is soon thrust into a world of lies, parallel lives and espionage. He doesn’t know who to trust, who’s on his side and if there are even sides to be on.

Besides Simmons, the rest of the cast is good as well. Olivia Williams plays Howard’s wife/ex-wife and she’s always excellent. Harry Lloyd (Game of Thrones’ Viserys Targaryen) is very good as well playing a character who got to where he is because of his father-in-law and you never know if there’s more to him or not. Sara Serraiocco is the assassin Baldwin and Nazanin Boniadi is Clare, Lloyd’s wife who might be more than meets the eye.

I really liked Counterpart Season 1 and can’t wait for the next season because of the sort of cliffhanger this season ends on. I binged this Blu-ray set over a few days and I can see a lot of people watching it quickly as well. If you like spy thrillers mixed with some science fiction then this is…