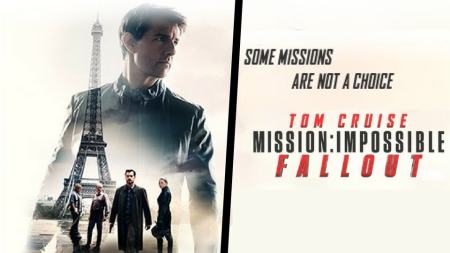 Over the years the Mission: Impossible franchise has morphed from spy thriller to over the top craziness the same way The Fast & The Furious franchise is no longer about illegal street racing. And you know what? I’m perfectly fine with that.

The latest film Mission: Impossible – Fallout is just as wild as the previous two films and finds Tom Cruise doing stunts no man in his 50s should be doing. Just like previous movies in the series, Fallout makes for a perfect Eat Some Popcorn, Enjoy Some Air Conditioning Summer Blockbuster. There are chase scenes, explosions, guns and all kinds of attractive people. Sometimes that’s all you need.

It has some flaws like every film of course. At almost 2 and a half hours long, its runtime is way too long. It could have been tightened up to a solid 2 hours 10 minutes. Michelle Monaghan is in the movie and I honestly had forgotten about her character from the third flick (I think it was the third one). If you haven’t seen them all recently, you might not remember everything. Not remembering who she was didn’t hurt my enjoyment of the film though. Even in a role that doesn’t require a whole lot besides punching and action, Henry Cavill’s character comes across too wooden. Maybe that’s just me though.

But besides those few things, I enjoyed the movie a lot. Cruise continues to do ridiculous stunts he probably shouldn’t. He jumps out of a plane and you can tell it’s actually him. He climbs a mountain side again and all kinds of other craziness. Are we sure Tom’s human???

Besides Cruise’s stunts, the action itself is what you expect from this franchise. There is a great chase scene with cars, motorcycles, a boat and trucks. You’d expect to see something like that in a Bourne flick. There’s a great fight with Cruise, Cavill and a man they are looking for in a bathroom. It spans multiple countries and there is action in all of them.

What also works is the comedy. A lot of action films try to force comedy into their movies to lighten the mood and it doesn’t always work. Cruise, Ving Rhames and Simon Pegg have done a few of these already and you can see the chemistry they’ve built. Pegg is naturally a funny guy, but the trio overall is funny together. None of it feels forced and it gets laughs because of it.

With Mission: Impossible – Fallout being the sixth film in the series, you should know by now if this movie is for you. I enjoy the franchise and had a lot of fun with it. It should do real well at the box office especially overseas because even though he’s been around for decades, Cruise is still very much a movie star in every way.