Mill Creek Entertainment, the leader in value home entertainment, is excited to announce the upcoming release of the 2001 anime film Osamu Tezuka’s Metropolis as a SteelBook® Blu-ray + DVD combo on October 30, 2018. This spectacular film in its all-new collectible packaging will be available for $34.98 SRP. 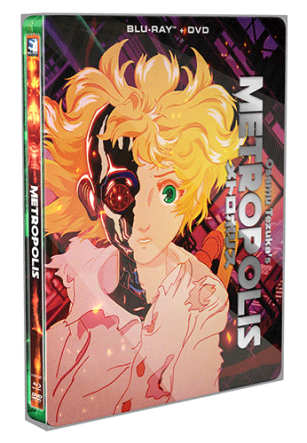 Screenplay by anime legend Katsuhiro Otomo (Akira) and directed by Rintaro (Galaxy Express 999), Osamu Tezuka’s Metropolis is a spectacular visual film with stunning imagery, unforgettable characters, and leaves you questioning what it takes to be human. Special features include interviews with the filmmakers, The Making of Osamu Tezuka’s Metropolis, original Japanese audio, and multi-angle animation.

Based on the classic manga, Osamu Tezuka’s Metropolis is the industrial, high-tech city of the future. Duke Red, the unofficial leader of Metropolis, plans to unveil a highly advanced robot named Tima, but his violent son Rock distrusts robots and intends to find and destroy Tima. A Japanese detective and his nephew, Kenichi, travel to Metropolis to apprehend a mad scientist but instead find the robot girl. While trying to navigate the confusing labyrinth beneath Metropolis and avoid the people chasing her, Tima and Kenichi form a strong friendship that is tested when Duke Red separates them, endangering not only Tima’s life but also the fate of the universe.

You can preorder it on Amazon

The opening scene of Osamu Tezuka’s Metropolis in High Definition